The final frontier. The last five years have seen enormous progress in understanding the genetic basis of sporadic severe, treatment-resistant epilepsies due to de novo mutations. However, there has been much less progress in understanding the basis of familial epilepsy, which has historically been the major focus of epilepsy genetics. Particularly small families with mild epilepsies are challenging to solve, with the exception of rare families with pathogenic variants in known epilepsy genes. Exome-first approaches in familial epilepsy are particularly challenging given the sheer amount of variants segregating in small families by chance. In a recent publication by the Epi4K Consortium, a novel approach is presented to identify the genetic basis of familial epilepsies, overcoming the limited power of small families by analyzing rare variants in probands in a case/control study design. Here are some fascinating insights from this study. 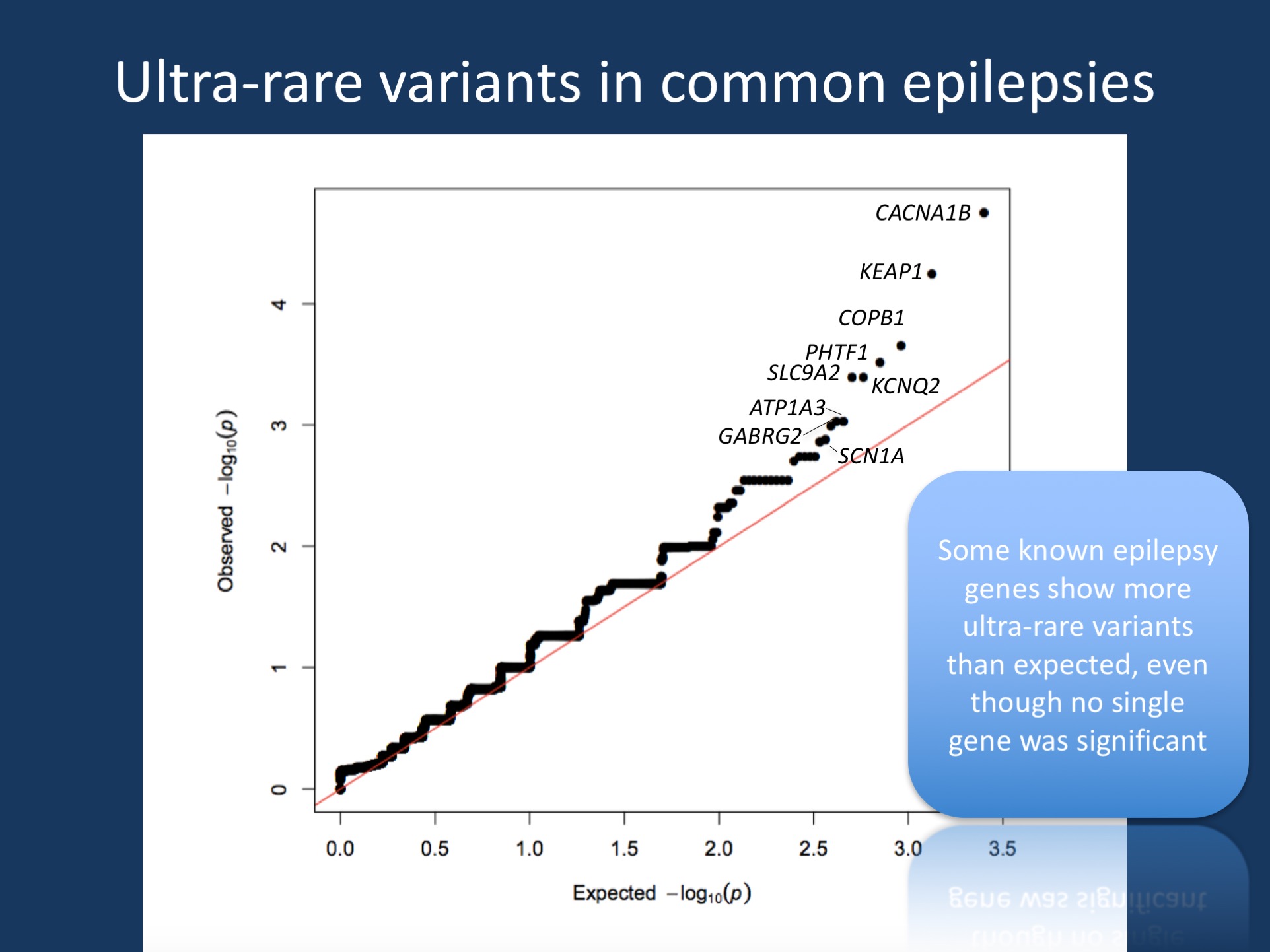 Figure 1. The Q-Q plot for the burden analysis in from 640 probands with IGE/GGE and 3877 controls. Rare variants in known epilepsy genes were significantly overrepresented, even though no single gene was significantly associated after correcting for multiple testing. Non-copyrighted version of figure provided by Slave Petrovski.

Small epilepsy families. In contrast to large epilepsy families with ten or more affected individuals, small dominant epilepsy families present a particular challenge. While it is intriguing to look at the pedigree of a family with a mother and three children affected by a mild generalized epilepsy, our chance of identifying an underlying genetic etiology is much lower than identifying a causative genetic variant in a single, sporadic patient with epileptic encephalopathy. While our chance of finding a causative gene in a patient with epileptic encephalopathy is around 30%, the possibility to find an answer for a small dominant epilepsy family is probably 5% or less. Even in studies that include larger families, the percentage of families with identified genetic causes barely rises above 50%. Accordingly, in 2017, familial epilepsies are no less challenging than epileptic encephalopathies. I usually refer to small multiplex epilepsy families as the final frontier of genetic research, indicating that solving the genetic contribution in small families may even be more complex than finding risk factors for sporadic, non-familial epilepsy.

Case/control versus family studies. Looking back at the era of copy number variation, the apparent contrast of strong association of rare variants with disease versus an apparent lack of segregation in families is nothing new. We have encountered this with microdeletions at 15q13.3, 16p13.11, and 15q11.2 that show a strong association with epilepsy, but often do not segregate in families in a way that we would expect them to. The main take home message from these initial studies was that rare to ultra-rare variants are not the same as fully penetrant monogenic variants – they are a “third kind of variant”.

Epi4K study. The current Epi4K study follows a comparable paradigm. Rather than performing classical linkage studies on familial epilepsy, the authors analyze probands in a case/control design, separating phenotypes by non-lesional focal epilepsy and generalized epilepsy. In order to associate genes with disease, the authors use a burden analysis, counting variants in patients versus variants in controls. There are many variations of such a test, and the authors use ultra-rare genetic variants in cases and controls as qualifying variants after correcting for possible biases. Here are some of the results stratified by phenotypes.

IGE/GGE. The authors compared ultra-rare variants from 640 probands with IGE/GGE and 3877 controls. Ultra-rare variants were defined as variants with a minor allele frequency (MAF)of  up to 0.05% in the test population, and absent in EVS and ExAC reference cohorts (MAF = 0%). Rare variants in known epilepsy genes were significantly overrepresented, even though no single gene was significantly associated after correcting for multiple testing. Given the signal on the gene group level, this may indicate that there are signals lurking in the noise that would need a higher sample size with additional statistical power to emerge. The Epi25 collaborative has already sequenced 6,000 samples and may address some of these questions. Out of the top contenders are known genes such as SCN1A, GABRG2, ATP1A3, and KCNQ2, but also previously unknown genes such as KEAP1 or COPB1. CACNA1B was the most prominent gene in this analysis. Even though this gene seems familiar given that it codes for a calcium channel, it is technically also a novel gene. Given that KEAP1, COPB1, and CACNA1B are not associated with more severe neurodevelopmental disorders, they may represent private genes for milder generalized epilepsies.

Non-lesion focal epilepsies. For this cohort, the authors compared 525 patients with non-lesional focal epilepsies to 3877 controls using the same analysis. The DEPDC5 gene stood out as the single most significantly associated gene, followed by LGI1, PCDH19, SCN1A, and GRIN2A. With the exception of PCDH19, these genes have previously been identified with focal epilepsies, which is now further confirmed in the Epi4K cohort. The identification of patients with rare PCDH19 variants is unusual given that this gene is usually associated with a more severe phenotype that frequently includes intellectual disability. The Epi4K study may indicate that the spectrum of PCDH19 may be larger than we had initially anticipated.

This is what you need to know. The recent Epi4K study is the first large-scale exome study that has been performed in a case/control design. The study finds variants in known epilepsy genes, but also several novel candidate genes that are worthwhile following up on. No single gene stands out significantly from the generalized cohort, highlighting the genetic heterogeneity that has made IGE/GGE so difficult to understand in the past. Finally, the study indicates that generalized and focal epilepsies may have separate genetic etiologies, indicating that stratification by phenotypes in future studies such as Epi25 may be necessary for candidate genes to emerge.

One thought on “Ultra-rare genetic variants in familial epilepsies”