The Wild West. The diagnostic genetic testing landscape in 2016 is a paradox. In theory genetic testing has never been more widely available clinically, with over 20 diagnostic laboratories in the US alone offering a variety of genetic testing options for patients with epilepsy, ranging from single gene testing to NGS panels to whole exome sequencing. However, access to and reimbursement of genetic services varies widely, with no consensus on an approach to testing or professional guidelines to aide clinicians. Here is our brief guide to epilepsy genetic test selection for busy clinicians. 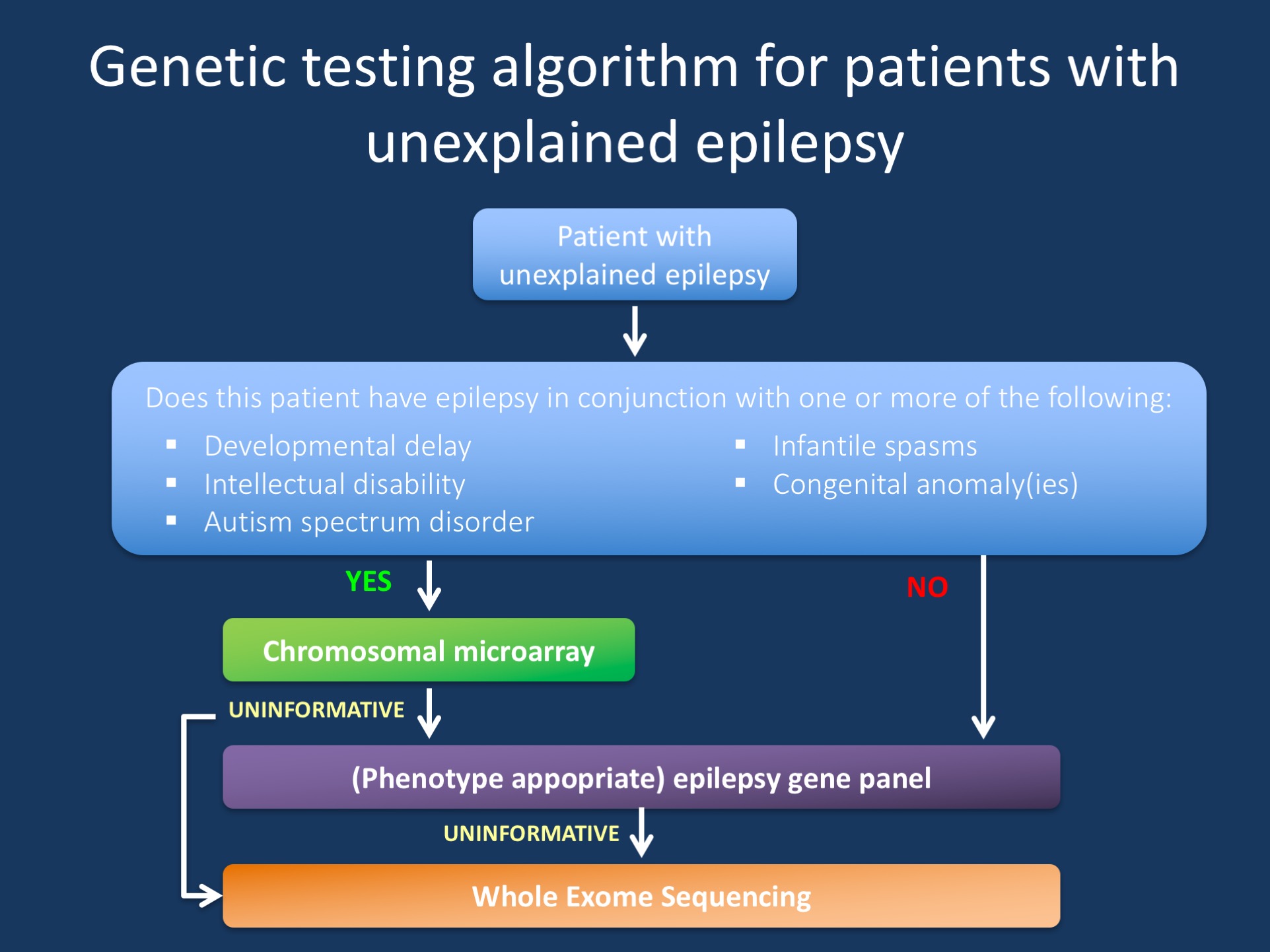 Who is ordering/paying? There are patients whose insurance only covers single gene testing, while another patient’s insurance mistakenly approves whole exome sequencing twice, ordered simultaneously by the patient’s neurologist and geneticist – from two different labs. And of course whether or not a patient with epilepsy is even offered genetic testing may depend on the clinician he/she sees. Outside the United States, access to and reimbursement of genetic testing and NGS in particular can be even more variable, with some countries’ healthcare systems only partially covering testing costs and others not covering it at all. In 2016 we are living in the Genetic Wild West, where physicians and genetic counselors are left to play the role of vigilantes, fighting to get genetic testing covered any way they can.

Reimbursement paradise. In the lawless Genetic Wild West, the idea of genetic test selection may seem superfluous, since the test a patient gets is often dictated by circumstances beyond the patient’s or clinician’s control. But for the sake of argument, let’s assume we live in a reimbursement paradise, where all testing costs are reimbursed for all patients. If such a place existed, how should you go about selecting the appropriate genetic test for your patient with epilepsy?

Chromosomal microarrays (CMA). For many patients with epilepsy, chromosomal microarray (CMA) is the recommended first-tier test. CMA is recommended as a first step for patients with developmental delay, intellectual disability, or autism spectrum disorders. CMA is an inexpensive and quick test, with a reported diagnostic yield of ~5% in patients with epilepsy. Although CMA may identify causative copy number variants (CNVs), the rate of variants of uncertain significance (VUS) is also relatively high, and parental testing may be needed to help decipher whether or not the identified CNV is playing a role in the patient’s epilepsy. Given the relatively low yield, CMA may also not be the best place to start for patients without ID.

Gene panels. If the CMA was uninformative, a logical next step is an epilepsy gene panel. For patients without intellectual disability or an autism spectrum disorder, an epilepsy gene panel may be a better place to start. Restrictive insurance policies aside, single gene testing is typically not recommended in conditions that can be caused by more than one gene. Even for conditions such as Dravet syndrome, which is clinically recognizable and largely caused by pathogenic changes in a single gene, panel testing is usually the preferable approach. Testing multiple genes simultaneously via an NGS panel saves time and money compared to sequential single gene testing. Panel detection rates are about 20% for most patients, with patients with earlier seizure onset often having a higher diagnostic yield (~40%). The size of an epilepsy gene panel can range from a few genes to over 1000 genes. Some labs offer more targeted, phenotype specific or age of onset specific panels. In general, the fewer genes on a panel, the lower the chance of finding a variant of uncertain significance (VUS), so some clinicians may prefer a more targeted approach. However, other clinicians may choose larger panels that may also comprise a broad selection of other genes. Analysis of deletions/duplications is included in some NGS panels, which is particularly relevant for genes whose mechanism is loss-of-function (i.e. SCN1A or STXBP1). Custom gene panels are also offered by some diagnostic labs, which allow clinicians to select genes to “design their own” NGS panels. This may be an option if a patient’s insurance won’t cover whole exome sequencing and a clinician is interested in testing genes that may not be offered on standard epilepsy NGS panels.

Exome sequencing. Whole exome sequencing (WES) is typically seen as the end of the road, the final stop on the diagnostic odyssey; however it may make sense to bypass panels and go straight to WES for patients with additional features suggestive of a genetic syndrome (e.g. dysmorphic features, multiple congenital anomalies, etc.). The yield of WES in patients with epilepsy is approximately 35%, with higher rates in patients with early-onset epilepsies and epileptic encephalopathies. An obvious advantage of WES is that all coding regions of all genes are sequenced simultaneously, but technological limitations mean that some regions of the genome are not covered as well as others, and larger deletions/duplications usually cannot be detected. Since most WES is done on a trio basis (patient plus both parents), the VUS rate compared to NGS panels is much lower. Secondary findings are typically offered by most labs. Some patients see this as an advantage and an opportunity to learn more about their health, but some clinicians see this as a drawback, since it makes the consent and results disclosure process lengthier and more complicated. Trio-based WES may also reveal information about family relationships, such as misattributed paternity. Although rare, these cases do happen and as a clinician it’s best to be aware of this possibility during the consent process. Although results may come back from WES as “negative”, systematic reanalysis of WES data often leads to a diagnosis, so reanalysis of WES data may be beneficial, typically at least 12 months after the initial uninformative result.

What does this all mean? Living in the Genetic Wild West of 2016, without guidelines regarding the appropriate use of genetic testing in patients with epilepsies, the testing approach for these patients will lie with the genetic vigilantes who care for them. If we considered diagnostic yield alone, WES would seem like the appropriate first step for all patients. However, for a patient with Dravet syndrome, for example, you would run the risk of missing a clinically relevant deletion of the SCN1A gene that could be detected using different testing strategies. When deciding which test to order, it’s best to take some time to decide which option is best for you and your patients. Here are some points to consider when deciding which test to order and which lab to order from: