Porta Nigra. This is part two of our travel diary. After a one hour drive through the rural Eifel mountains, you start a seemingly endless descent upon the Moselle Valley to get to Trier. A former Roman town with old ruins, a former summer residence of local royalty, a cathedral in redevelopment for 1500 years and Germany’s oldest city, Trier is rich with history. We didn’t know any of this as it was simply meant to be our stop on our way to Luxembourg, but it is hard to take a walk through the city without noticing. Yet Trier’s most famous son is a controversial historical figure who left to never return before starting any of his far-reaching work. Here is what we can learn from Karl Marx about the exchange value of scientific work in 2016. 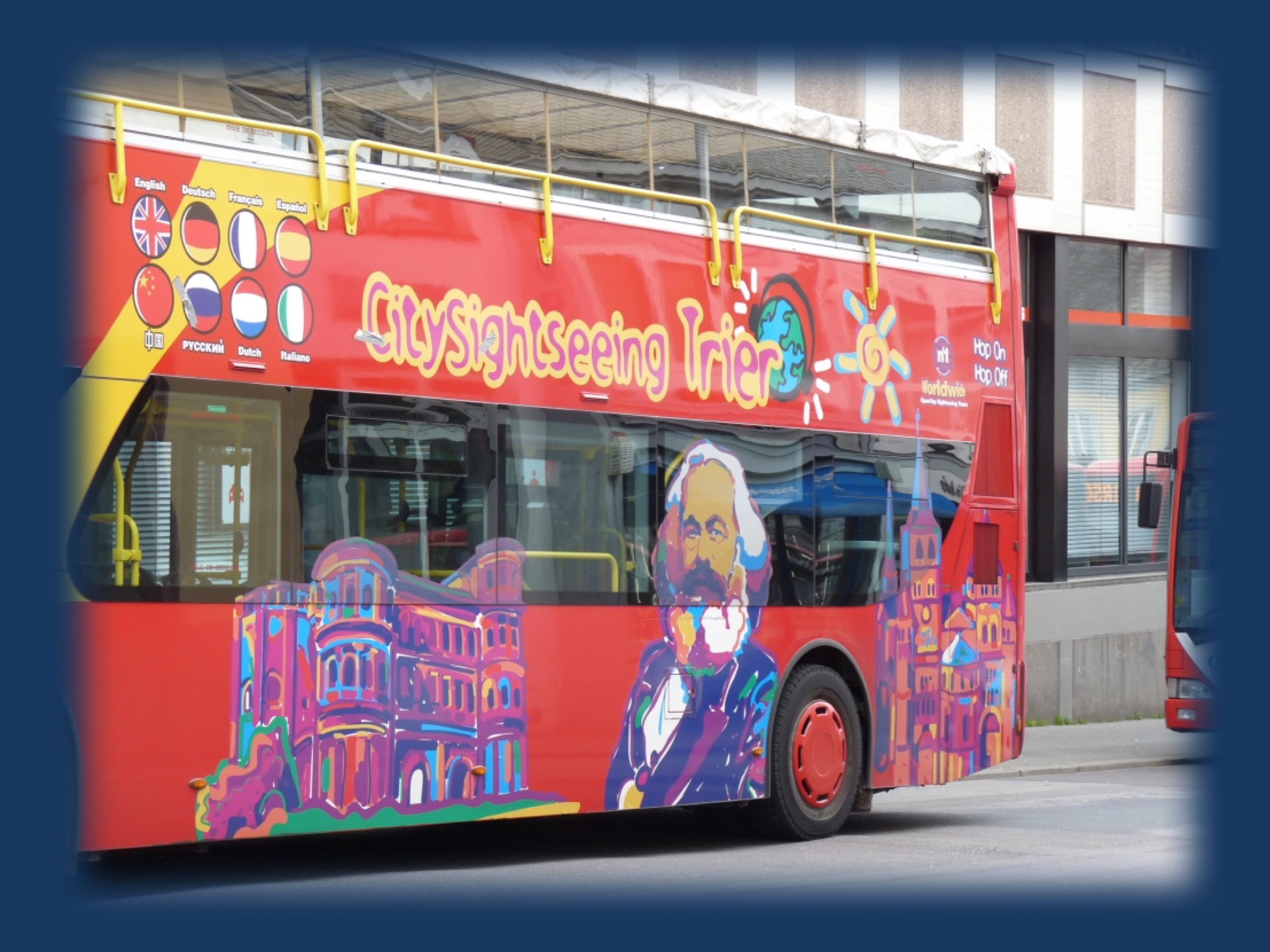 Karl Marx. I admit that I have been struggling with this post, but since our visit in Trier, it has seemed inevitable to me to write a post connecting Marx to the workings of modern genomic medicine. Don’t get me wrong, I am not trying to prove a point; I’m simply doing it to force myself to take a different point of view. I did not learn all that much about Marx himself in school, given that the interest in his work was pretty much at an all-time low during the years after the German reunification. Roland was our tour guide through Trier last Tuesday and we covered quite some ground, attempting to mainly see the relics of the prior Roman settlement. However, as with Goethe in Leipzig and Weimar, Marx is unavoidable in Trier. Within half an hour, we spotted at least two tourist buses with a gigantic Marx silhouette. Trier is trying to cash in on Marxism nostalgia and the fact that he was born there is apparently attractive to tourists. The house where he was born was transformed into a Karl Marx museum. The ground floor of a house that he grew up in carries a big plaque and – ironically – was transformed into Euro store, the German equivalent of a dollar store.

The Capital. If you strip away layers and layers of history and ideology, Marx’s work begins with an observation that he made in England during the industrial revolution. Marx looked at how so-called commodities are produced in an industrial society. Commodities are objects that satisfy human needs and wants, such as food, machines, furniture, clothing, or vehicles. He basically observed that commodities have two different values – the use-value, which is the intrinsic property of an object. For example, the use-value of a chair is that fact that it satisfies our need to have something to sit on. In addition to the use-value, objects have an exchange-value, which is basically the price of the object. Price is one-dimensional and Marx was concerned that even though producing an object is a social process that involves hierarchy, division of labor, and possibly exploitation of the workers, this is not reflected in the exchange-value. For example, in a capitalist market, you would buy the cheaper of two otherwise identical chairs. The price itself does not tell you anything about the social framework of the production process and to what extent workers have been exploited during this. Marx was concerned that such a system would favor the increasing exploitation of workers, giving rise to conflicts between classes in society.

Hauts Forneaux. The following day we continued to the University of Luxembourg, located in the former steel factory at Esch-Belval. You feel dwarfed next to the gigantic furnace that was used to melt the iron ore. Even though Belval was only built in the middle of the 20th century, you get a sense what Marx meant when he indicated that humans in the industrial workplace are reduced to robot-like creatures that do no longer own the products of their work. Belval has been now been transformed into a large-scale open air museum about the history of steel mining in Luxembourg and also houses the post-modern buildings of the University of Luxembourg. It was a busy day starting with a conversation about the difficulties of precision medicine trials with repurposed drugs in Dravet Syndrome and ending with a late-night discussion during a car ride back to Trier contemplating the pros and cons of bioinformatics core units and their effect on the scientific productivity of research groups. But where does Marx figure into this?

The commodities of science. Marx’s observation of the peculiarities of the exchange value can be abstracted to science. In many complex systems with multiple actors, people are using substitute measures to indicate the value of their work. Science is no exception to this. Here is one example. When I interviewed for my first postdoctoral position, my prospective employer pointed out that even though I had indicated that I had done two years of basic research, I did not have any publications. In science, we use publications and impact factors as a measure of scientific productivity. Basically, once you have managed to place your work in a high-ranking journal, the amount of work and the social interactions that went into this work become obscured. Having a scientific article published in Nature or Science does not tell about the conditions under which this work was produced or whether the generation of this piece exploited someone else’s workforce. If Marx had a closer look at this, he would probably point out that substituting publications for the real use-value of scientific work may introduce several social issues. Such a system would exploit inequalities in the social process that would give rise to faster and higher impact publications. This means that in an unregulated and cut-throat competitive society, a capitalist scientist would feel tempted to extract as much workforce out of a technician, doctoral student, or postdoc while giving them as little exchange value (authorship, publications) as possible. This would be Marx’s dystopian vision of science – capitalist extracting slave labor from their dependent workers to produce a maximum of scientific output, producing an increasingly dissatisfied scientific proletariat that will eventually rise and overthrow the existing order.

Differences. There are several reasons why the picture painted above does not reflect the current state of science. First, science is regulated. We have rules to reinforce recognition of the work that went into a scientific piece of work. If a lead scientist chooses to ignore his doctoral student’s contribution to a publication, there are ways to hold the scientist accountable both within his institution and the journal. The regulatory process around science is furthermore built in a way that actually encourages recognition of the student’s work. For example, the promotion process of the lead scientist would typically require him to demonstrate that he supported his students and that his students were able to publish their work. Secondly, science works by some sort of honor system. If you have the reputation of being an exploitative science-capitalist (in Marxist terms), you may be ostracized from the scientific community, which would work to your disadvantage. Your chance of publishing would actually decrease. This forces to people to a mutual standard of fairness. Third, you may opt not to play the game. In 19th century Great Britain, industrial workers did not have the option to seek alternative labor, but in 2016, you may choose not to be part of the scientific community and look for a different job.

Taken together, I am not sure how much Marx tells us about the current state of science. However, it is good to realize that there are regulations in place to limit the exploitation of those who are not in power to make the rules.