The holiday season. On Dec 25th, I was forced to disable the long-range communication device of the Stellosphere – and all I had was a simple screwdriver. It was a tough choice, but when you’re out there by yourself, you have to make bold choices. If you now believe that I have a MacGyver-like engineer skillset, I hate to disappoint you. All I did was take out the batteries of one of the toys that our kids got for Christmas so it would stop making noise every time you touch it. Here are the three books that I am trying to read over the holiday season. I probably won’t get through them completely as I want to spend as much time with my family as possible, but here is what they have told me about epilepsy genetics so far. 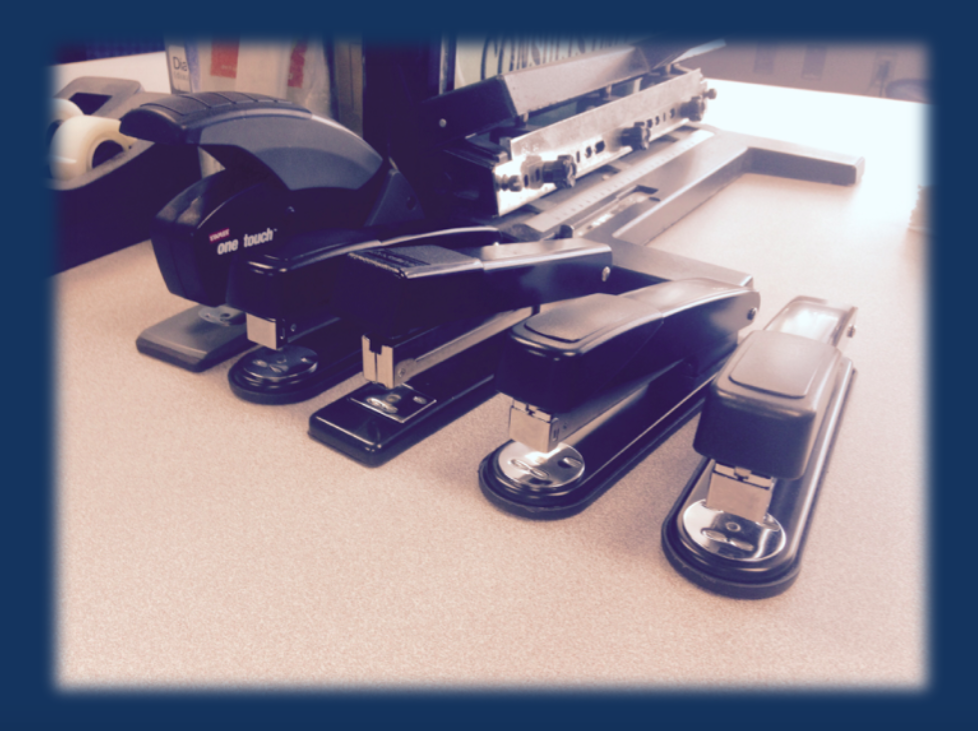 Here is one of my 2015 photos that pretty much symbolizes busyness. This is a collection of staplers in the CHOP Neurology resident room – over a period of days to weeks, a significant fraction of the staplers in the 6th floor of the Wood building migrated into our resident room in early September. As nobody knew where exactly they came from, it was impossible to put them back – so I arranged them for this photo shoot. When we are busy, we unconsciously get competitive about resources like staplers and start hoarding. Staplers are an innocent example – I assure you that nobody’s productivity was significantly impaired by this, but you can easily imagine how our hoarding instinct that kicks in when we are busy may be counterproductive.

“Vaporized”. It is intriguing to consider that precision medicine of the future may have more in common with Uber and AirBnB than with traditional clinical trials. Our future projects may involve large data-driven endeavors to find questions that we don’t even know exist. Robert Tercek’s book on the strategies for the surviving in a dematerialized world put some interesting thoughts into my head about the near future of genetic research. In contrast to other large data sources that science deals with, genetics still has tremendous barriers to connect data – genetics is performed in local genome centers or diagnostic labs, and only a small fraction of the data is shared or accessible. Following the logic of “Vaporized”, there is an ongoing, unstoppable tendency to use technology in order to connect data and to liberate information from local storage sites. Therefore, it is only a matter of time until all the genetic data can be accessed jointly – it just depends on who comes up with the first really useful platform to make this happen. To quote Tercek: “Everything that can be connected will be. Everything that can be decentralized will be.”

“Busy”. Tony Crabbe’s book looked like a run-of-the-mill productivity book at first glance. However, after I found myself reading it for five minutes in a bookstore in the London Heathrow airport, I realized that there was something special about it and I might as well buy it. It wasn’t the productivity aspect of this book that made it interesting, in fact it was quite the opposite. The fact is that we are all becoming increasingly busy – we had 50 emails per day last year, 100 emails per day this year and you will probably have 200 emails per day next year. One way to counter these increasing demands is to optimize your work habits to get as much done as possible. However, “Busy” invites you to consider improvements of personal productivity to be a fool’s game. Optimizing your workflow, squeezing in more and more work into smaller amounts of time is nothing but a short-term band-aid until the demands increase so much to overwhelm you again. One idea of “Busy” is that you should re-consider your approach. For example, if you’re a control freak, it might probably be time to start to let go – Crabbe introduces the idea of replacing control by a sense of mastery, like a surfer riding a wave rather than a detail-obsessed wedding planner. This book also revisits the idea that in our economy of being busy, emails and our constant feeling of being switched on has made it problematic for use to truly focus on a given task. Especially since I have struggled last year to really get focused on specific things like putting together manuscripts, this thought struck a nerve with me. It’s a nice read that looks at how companies and organizations overcome their problems with being too busy and how you can apply this to your own life.

“The Gift of Failure”. And then, with all these science things going on, you’re supposed to raise kids and have a peaceful family life. I am probably the last person at this point to give out any useful parenting advice – given my crazy schedule, I have seen our kids way too little the past year and being home for a few days made me realize again how much I have missed my family. I once had the illusionary thought of discovering some sort of magic synergy between family life and professional life, finding some way that spending time with your kids recharges your batteries, which would allow you to be more focused and more productive than you would be otherwise. Every parent is probably giving me a “yeah, right” smile while reading this. It worked for me once when I actually wrote a manuscript while rocking our baby daughter to sleep, but this only works in a very, very small subset of cases. In all other cases, being a parent is exhausting. Likewise, my grandiose plans to raise a perfectly bilingual family is constantly going out the window – Disney and daycare are much more impressive for two little kids that one afternoon of German school per week.

To sum things up, we’re failing as parents all the time. Jessica Lahey’s “The Gift of Failure” tells us that it’s actually ok to fail with a smile. While it is easy to get angsty about as many extracurricular activities as possible, the best school districts, and the most valuable educational toys, our day-to-day failures as parents and the failures that our children may run into may actually help them become more independent in the long run. What is true for parenting is also true for the mentoring in the scientific sphere. In 2015, I haven’t always succeeded at getting young and talented clinician-scientists interested and committed to working in epilepsy genetics and precision medicine. Likewise, for many of my ongoing projects and research collaborations, I have failed to give them the attention that they deserved in 2015. It is therefore somewhat soothing to me that also this kind of failure may be instructive. Sometimes, also research projects and collaborative networks don’t need helicopter parenting, but room to develop and learn from failure. However, despite the continuous emphasis on failures in this paragraph, I am still celebrating my little victory in silencing the ever-mighty Stellosphere.

2016 coming up. The end of the year is usually the time when I feel like writing about non-scientific topics, sticking with my initial idea that this blog is supposed to be more than just a news service for epilepsy genetics. I’ll also put together a 2015 summary for you soon.