GRIN2A. Mutations in GRIN2A have initially been described in patients with neurodevelopmental disorders of diverse severity, including seizures, in 2010. In 2013, its prominent role in idiopathic focal epilepsies (IFE) was discovered simultaneously by three groups (Carvill 2013, Lemke 2013, Lesca 2013) and since that, mutations have repeatedly been associated with this spectrum of disorders. 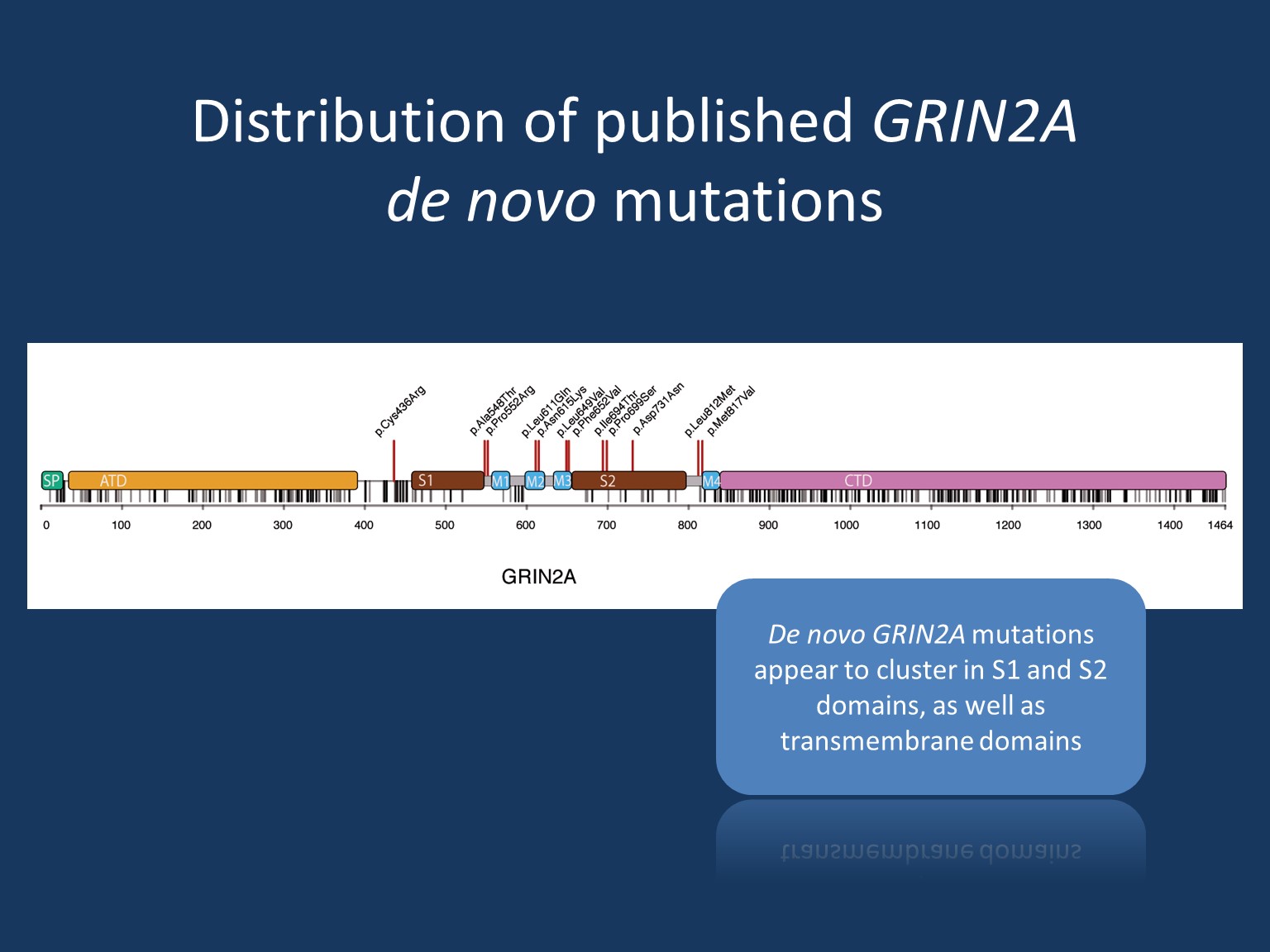 Figure from Strehlow, Heyne, Lemke 2015: Distribution of de novo mutations in comparison to single nucleotide variants according to the ExAC browser – a data base of genetic variants taken from >60.000 healthy individuals (unique – grey, recurrent – black)

The currently-known spectrum of phenotypes associated with genetic alterations in GRIN2A is very broad and ranges from (nearly) unaffected to severe encephalopathy.

Unaffected individuals: Some patients inherited a putatively or likely pathogenic GRIN2A mutation from an apparently unaffected parent. It currently remains unclear whether those unaffected mutation carriers might have subclinical phenotypes (such as EEG abnormalities in childhood). Furthermore, some putatively pathogenic GRIN2A mutations might in fact only predispose to IFE rather than being true causative mutations.

Severe epileptic encephalopathy: Only a few cases have been reported with severe developmental delay and intractable epilepsy.

Mutations in GRIN2A are frequently observed among severe phenotypes of seizure disorders (approximately 20% in patients with LKS and CSWS) and appear to be less frequent in the common and benign Rolandic epilepsy (approximately 5%).

All types of mutations have been described: missense, truncation, splice site mutations, as well as structural rearrangements, such as copy number variations and disruptions. Both de novo and familial mutations are known. However, de novo mutations appear to cluster in functionally important S1 and S2 domains as well as transmembrane domains and usually result in rather severe phenotypes.

GRIN2A encodes the glutamate-binding GluN2A subunit of the NMDA receptor in the excitatory synapsis. The assembly of this heterotetrameric receptor follows a specific temporo-spatial expression pattern.

For all mutations investigated so far, the observed pathomechanism resulted in a gain of NMDA receptor function by either loss of Zn2+ inhibition or increase of glutamate sensitivity or reduction of Mg2+ block.

As truncation mutations result in similar phenotypes as gain-of-function missense mutations, it is hypothesized that a lack of GluN2A expression due to truncation and haploinsufficiency is compensated by an increase of GluN2B expression. Thus the composition of the heterotetrameric NMDA receptors is changed towards more GlunN2B. As GluN2B is known to have a longer channel opening time the altered receptor assembly will likely result again in a gain-of-function.

The initially observed tendency of truncation mutations resulting in more severe disorders and missense mutations rather leading to milder phenotypes, could not be confirmed when looking at lager cohorts of GRIN2A mutation carriers (Strehlow, Heyne, Lemke 2015).

For the time being, it remains unclear what additional factors might modify the severity of phenotypes even within family members carrying the identical GRIN2A mutation.

Memantine is a specific NMDA receptor blocker that had been shown to normalise NMDA receptor function in vitro. Application of memantine in a patient with GRIN2A encephalopathy resulted in marked reduction of seizure frequency and other improvements.  However, this observation on a single patient still remains to be confirmed on additional cases.

Different research projects are ongoing to further elucidate the nature and impact of genetic variation in GRIN2A.