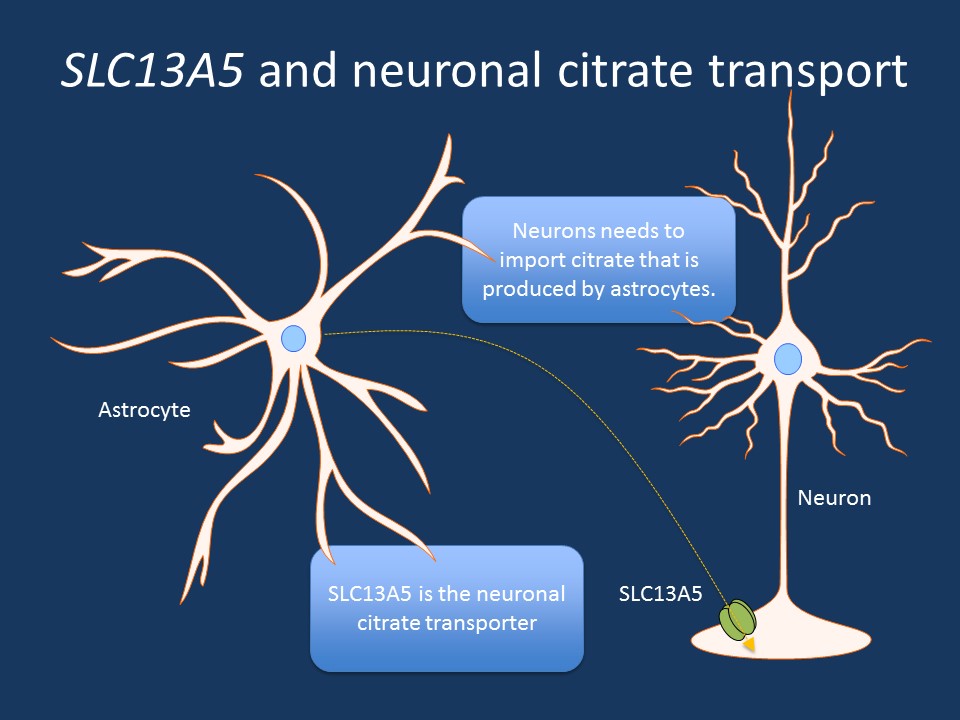 Figure. The citrate cycle is a critical metabolic pathway in all cells to transform glucose, protein, or fat into ATP. However, neurons cannot produce citrate by themselves and have to rely on citrate generated by astrocytes that is shuttled into neurons through the SLC13A5 transporter. Defect of this transport leads to severe, neonatal epileptic encephalopathy and hypoplasia (incomplete development) of teeth. Recessive mutations in SLC13A5 have been identified in 16 individuals so far and the publication by Hardies and collaborators demonstrates that the mutations found in patients lead to an absence of SLC13A5 activity.

Krebs cycle. Part of the reason why it took me so long to get this post out was the TCA cycle and the biochemistry of the genetic condition that this blog post is about. Let’s go back to high school biochemistry. There are several metabolic cycles at work when molecules like glucose, proteins or fat are broken down and transformed into ATP, the ultimate cellular fuel. One of the most important metabolic cycles is the tricarboxylic acid (TCA) cycle, also called the Krebs cycle or citric acid cycle. Basically, the citric acid cycle vaporizes half a molecule of glucose into CO2 and creates NADH, amongst other byproducts, as an intermediate energy carrier and electron donor that allows for the generation of ATP in our mitochondria. That’s what I vaguely remembered. What I wasn’t completely aware of was the fact that our neurons have one major problem when it comes to the TCA cycle.

Anaplerosis. On some occasions, intermediates from the TCA cycle are pulled away to produce either GABA or glutamate. Much of the neurotransmitter equipment is taken care of by an exchange between glutamate and glutamine between neurons and astrocytes (the glutamate-glutamine shuttle). However, the neuronal TCA cycle is leaky – molecules are constantly shunted away. Most cells can replenish TCA cycle intermediates through anaplerosis – with the exception of neurons. Neurons seem to be so specialized that they have to do without this metabolic pathway. Consequently, they are in constant need of TCA cycle components, such as citrate. Neurons cannot produce citrate by themselves; this molecule needs to be imported from astrocytes. SLC13A5 is the neuronal transporter that shuttles citrate into neurons. When this shuttle does not function properly, it results in various downstream effects that lead to a severe neonatal encephalopathy.

Phenotype. In this publication by Hardies and collaborators, we were able to describe the phenotypes of 8 patients from 4 families with SLC13A5 deficiency. All patients had severe neonatal epileptic encephalopathies and hypoplasia, i.e. incomplete development of their teeth. SLC13A5 deficiency had only recently been described as a genetic entity and our publication added eight additional patients to the eight previously reported patients by Thevenon and collaborators. Even though the mechanism behind SLC13A5 deficiency may suggest that the condition is a neurometabolic condition that can be identified through metabolic testing, there is no particular metabolite that was consistently abnormal in patients that may have given away the diagnosis – the genetic defect was identified by genetic testing of families, mostly hypothesis-free, through exome and genome sequencing. The teeth hypoplasia in patients may be a clue towards the diagnosis in the future, otherwise patients presented with treatment-resistant seizures that started as early as on the first day of life. Interestingly, the ketogenic diet seemed to have a positive effect in some patients. A causal mechanism for this treatment effect can be postulated based on the underlying biochemistry, in parallel to the effect seen in GLUT1 deficiency and pyruvate dehydrogenase deficiency. However, more research is needed in this area to definitely proof the effect of this treatment option.

What you need to know. SLC13A5 deficiency is a novel recessive epileptic encephalopathy due to a defect of the neuronal citrate transporter that is critical for shuttling citrate into neurons. Teeth hypoplasia may be a diagnostic indicator for the presence of this condition. Given that seizures in patients often manifest shortly after birth, genetic testing is the only reliable way to of making this diagnosis. The effect of the ketogenic diet seems promising and needs to be assessed in future studies.