Issue 12/2015. This issue of our publications of the week is about two new candidates for familial epilepsies and a study about the phenotypic range of one of our novel epilepsy genes. Also, I wanted to add a brief update on the progress of our Epilepsiome project. 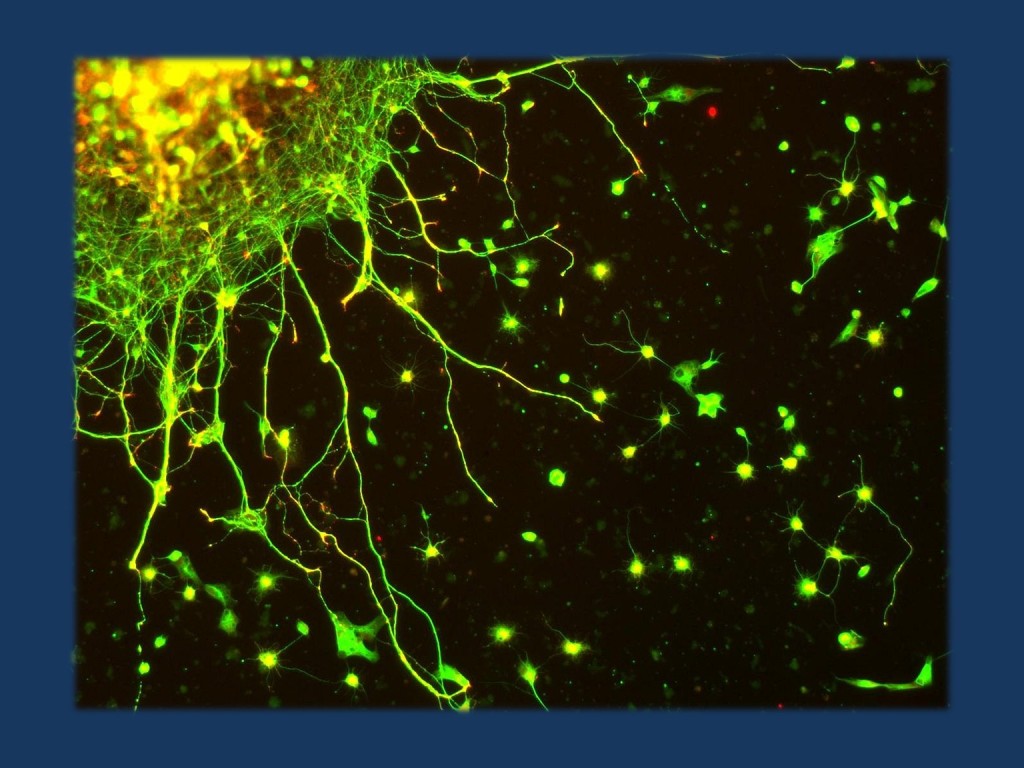 Edinger-Westphal neurons in culture. Stained for Tubulin (green) and Synapsin (red). Imaged with a Zeiss Axioskop 2 FS Plus equipped with a Zeiss Axiocam HRm. 100x total magnification. Modified under a CC license from https://www.flickr.com/photos/thelunch_box/2798522576/

Epilepsiome update. The community-based gene annotation project for epilepsy genes is in full swing and sticking with our blogging tradition, we have already transitioned some of the data online based on our recent blog posts on SCN1A, SCN2A, CDKL5, DNM1, KCNT1, LGI1, PCDH19, and STXBP1. The Epilepsiome reviewers are working in teams of 3-4 reviewer per gene. The KCNQ2 post earlier this week was written by the KCNQ2 Epilepsiome team consisting of Sarah Weckhuysen, Maurizio Taglialatela, Ed Cooper, and Pasquale Striano. Their team can be reached at kcnq2@epilepsiome.org. Genes to come will be SLC2A1, SCN8A, TBC1D24, CHD2, GRIN2A, CSTB and PRRT2. Please let us know if you’re not part of the dynamic Epilepsiome community effort yet. You should join!

NPRL3. In a recent publication in Annals of Neurology, Sim and collaborators report on a family with four individuals affected by focal epilepsy including two individuals with focal cortical dysplasia (FCD) IIa. Using linkage analysis and exome sequencing, the authors were able to identify a mutation in NPRL3, coding for a protein involved in the mTOR signaling cascade. Strangely, all affected individuals were within a single generation while the variant was transmitted through unaffected parental generations. The authors could identify two more inherited NPRL3 variants in 52 patients with FCD.
Comments IH: Even though focal cortical dysplasias may not be regarded as genetic initially, various genes for these focal brain malformations have been discovered. DEPDC5 is the most prominent gene within this group. With regards to NPRL3, it will be interested to see whether further studies will support this initial finding as gene identification in dominant conditions with incomplete penetrance almost always requires rigorous validation studies to tell causative variation from genomic noise.

CHD2. Mutations in CHD2 have been identified in patients with epileptic encephalopathies and recent clinical studies suggest that at least some patients may have a recognizable phenotype that is referred to as CHD2 myoclonic encephalopathy. However, we know little about the phenotypic range of CHD2 variants. In a recent publication in Epilepsy and Behavior, Trivisano and collaborators examine a cohort of patients with Myoclonic Astatic Epilepsy (Doose Syndrome) for mutations in the CHD2 gene, a genetic epilepsy that shares some phenotypic overlap with CHD2 myoclonic encephalopathy. Out of 20 patients, they identify only one patient with a CHD2 mutation.
Comments IH: Some patients with Myoclonic Astatic Epilepsy and mild intellectual disability may have mutations in CHD2, showing some variability in the phenotypic expression of mutations in this gene. One common denominator of most CHD2 phenotypes found so far is photosensitivity.

EXT2. The EXT2 gene usually has little to do with genes involved in neurodevelopmental disorders. It codes for exostosin 2 and has been found as a causative gene in hereditary multiple exostoses, a genetic condition of the skeletal system that leads to excessive bone protrusions (exostoses). However, in a recent study in the Journal of Medical Genetics, Farhan and collaborators identify EXT2 as the causative gene for a recessive familial syndrome characterized by seizures, intellectual disability, hypotonia, scoliosis, macrocephaly, hypertelorism and renal dysfunction.
Comments IH: There is a growing list of established genes that reemerge in an entirely unexpected context. EXT2 is an interesting example for this given that skeletal findings seem to be less prominent in the recessive condition than would be expected from the known dominant condition.