Auditory. The next gene in our weekly review is LGI1. We chose LGI1 for mainly two reasons. First, it is not a gene for epileptic encephalopathies, but for familial focal epilepsies and we are currently working up a large family with an LGI1 mutation. While the conditions of the mTOR pathways were discussed quite frequently, LGI1 was a little left behind. Secondly, there were various updates on LGI1 that didn’t really warrant a full post. Therefore, we have collected this in a summary post. 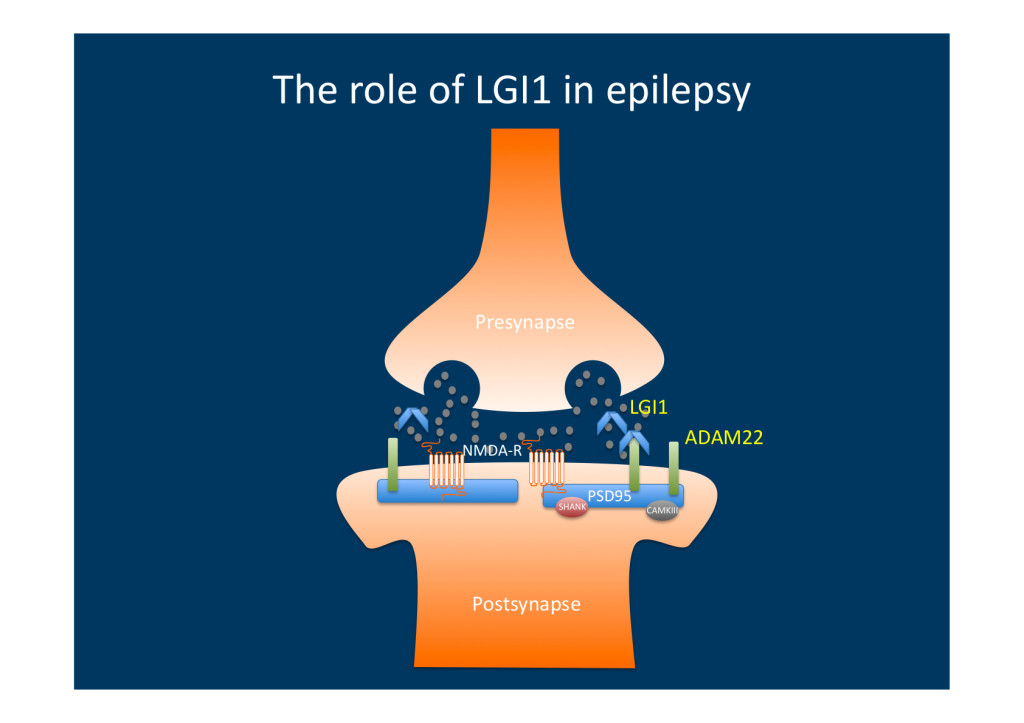 LGI1 is secreted from the presynapse and binds to postsynaptic ADAM22. Binding to ADAM22 results in altered intracellular signalling in the postsynapse that decreases excitability, probably through subunit changes in postsynaptic glutamate receptors. Mutations in LGI resulting in lack of ADAM22-mediated signalling therefore result in a net increase in excitability.

What’s the frequency, Kenneth? Parts of this post were taken and updated from a previous 2012 blog post that I named after an REM song. This blog title was a reference to the auditory features that many individuals with LGI1 mutations have. Here is an example.

Can’t you hear the radio?  “S.W. was spending an afternoon at his girlfriend’s house when he suddenly heard a radio sound in his right ear.  He asked his girlfriend whether she was aware of this sound as well, but he could not understand her answer. S.W. then lost consciousness and convulsed. He presented with a second seizure several months later. S.W. was started on carbamazepine and remained seizure-free. Interestingly, his mother had seizures starting at the same age. Furthermore, his sister had her first seizure at the age of 8 years and frequently reported auras where she would see colorful pictures and hear noises like a familiar song. These episodes sometimes occurred seconds before she had a generalized tonic-clonic seizure.”

LGI1. This case report taken from our book chapter in Steven Waxman’s Molecular Neurology illustrates a family with lateral temporal lobe epilepsy (LTLE), a rare form of seizure disorder in which auditory features often precede a generalized tonic-clonic seizure. Auditory or acoustic features including radio sounds, machine noises or more complex acoustic phenomena arise from the lateral temporal lobe, a part of the brain important for auditory processing.  LTLE is the premier example that genetic epilepsies are not necessarily due to ion channels.

Genetics. In 2002, Kalachikov and collaborators identified mutation in LGI1 as the cause of familial lateral temporal lobe epilepsy. The LGI1 protein was initially identified as a candidate gene for glial tumor progression and subsequently named leucine-rich gene, glioma inactivated 1 (LGI1). Ever since the initial discovery, probably more than 200 individuals from 50 families have been identified. The pathogenic mechanism is mainly haploinsufficiency, where one copy of the gene is disrupted, either through truncating mutations or missense mutations. Missense mutations in LGI1 may cluster in one of the functional domains that is relatively early in the protein. There are also some deletions reported. While LGI1 mutations are relatively common in familial lateral temporal lobe epilepsy, they are very rare in sporadic patients.

How do I interpret an LGI1 variant in a patient? LGI1 is included on any major epilepsy panel and depending on the reporting practice of the lab, novel variants in this gene are sometimes reported independent of the phenotype. While there is a broad phenotypic spectrum with many epilepsy genes, this is not true for LGI1, where the phenotype is restricted to mild focal epilepsies. Therefore, if a variant in LGI1 is returned in a patient with a different phenotype such as an epileptic encephalopathy or generalized epilepsy, the relevance of this variant may be questioned, particularly with novel missense variants. Variants in the LGI1 gene are distributed throughout the gene and there are no recurrent variants that may facilitate interpretation. LGI1 variants are usually inherited in an autosomal dominant fashion, suggesting that segregation analysis is not helpful in patients given that families with incomplete penetrance have been reported.

Is there are a mutation database? No, as of 2015, there is no mutation database and the entry into ClinVar and OMIM is not complete.  One of the most comprehensive reviews is the 2012 publication by Ho and collaborators that lists 33 variants from 36 families.

Secreted. The LGI1 protein is secreted from the presynapse, historically providing the first example of a non-ion channel epilepsy. The LGI1 proteins binds postsynaptically to ADAM22 and presynaptically to ADAM23. Both proteins are involved in cell-cell adhesion and play an important role in synaptic maturation by establishing a physical contact between the pre- and the postsynapse. LGI1 forms a dimer and is the linking element between both membrane proteins. 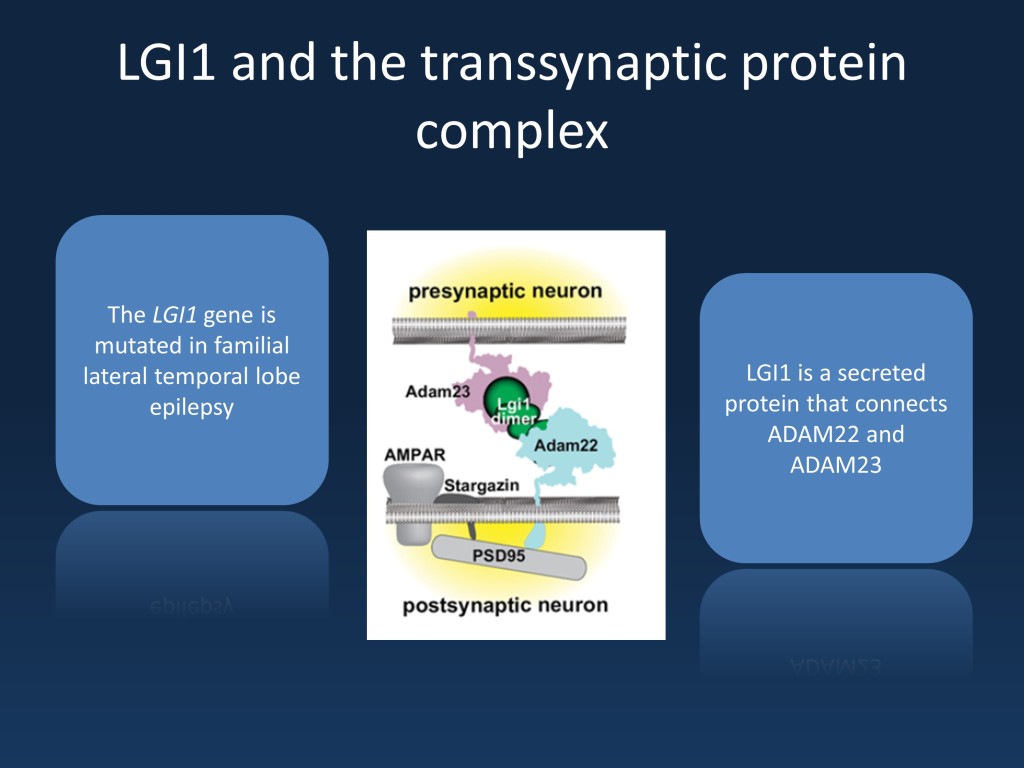 LGI1 connects postsynapse and presynapse through a transsynaptic network interacting with ADAM22 and ADAM23. (Modified from Kegel et al., 2013 under a CC license http://asn.sagepub.com/content/5/3/AN20120095)

ADAM22, ADAM23, LGI2. The two genes for the LGI1 interacting proteins ADAM22 and ADAM23 and the gene for the LGI2 homolog have been tested as candidate genes. For both ADAM23 and LGI2, there is compelling evidence from a canine focal epilepsy syndrome that both genes are involved in non-lesional partial epilepsy. However, these genes have not been shown to be involved in humans yet.