Issue 8/2015. This week’s review of the relevant publications in the field is about a novel risk factor for focal epilepsies, a gene involved in mRNA transport from the cell nucleus, and a small, confirmatory study on exome sequencing in Infantile Spasms. 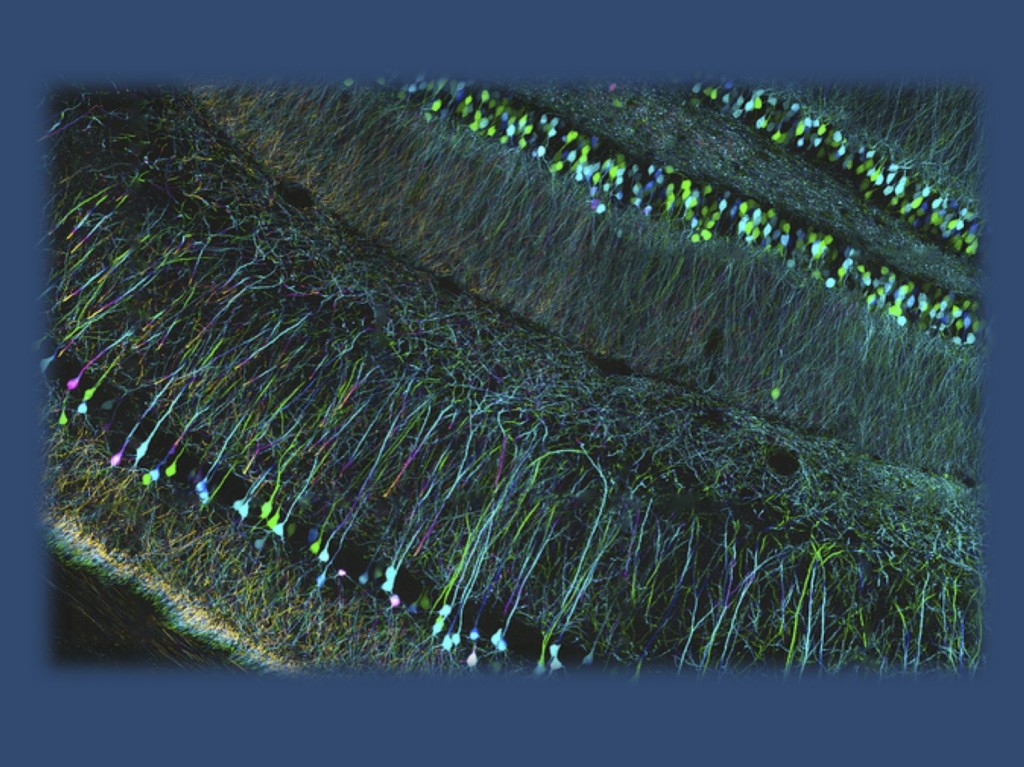 Confocal microscopy of mouse brain by Zeiss microscropy (under a Creative Commons licence from http://www.flickr.com/photos/zeissmicro/10799673016)

RBFOX1. In a recent publication in Epilepsia, Lal and collaborators investigate the role of RBFOX1 deletions in patients with focal epilepsies. Their patient cohort included patients that we usually don’t think of as good candidates for genetic studies, namely adult patients with focal epilepsies without intellectual disability. Many of the patients reported by Lal and collaborators were resistant to treatment with antiepileptic medication. The authors focused on deletions in the RBFOX1 gene that were previously found to be risk factors for Idiopathic/Genetic Generalized Epilepsies and Benign Rolandic Epilepsy. They were able to identify exonic RBFOX1 deletions in 7 out of 807 patients, while deletions were virtually absent in 1500 controls. The RBFOX1 protein is a splicing regulator that is particularly involved in the regulation of ion channels.
Comment IH. Almost 1% is a lot for a microdeletion, especially for a common epilepsy type such as adult focal epilepsy. The study by Lal and collaborators emphasizes again how useful pooled and available data is that we can use test hypotheses about a specific candidate gene.

THOC2. In a recent publication in the American Journal of Human Genetics, Kumar and collaborators identify a novel X-chromosomal gene for syndromal intellectual disability. I have included this publication in our weekly list as some of the patients with mutations in this gene also had epilepsy. THOC2 is involved in the TREX complex, which links transcription to mRNA export through the nuclear pores. Basically, the TREX complex makes sure that the generated mRNA is not floating around freely in the nucleus, but finds its way out of the nucleus in order to be transcribed in the cytoplasm.
Comment IH. THOC2 adds to a very long list of X-chromosomal genes implicated in intellectual disability. While it is virtually impossible to review all of the >200 X-chromosomal genes implicated in X-linked intellectual disability, it may be worthwhile to keep an eye on the field as some of the genes initially proposed to be involved in X-linked intellectual disability eventually turned out to be genes for epileptic encephalopathies, as in the case of CNKSR2.

Exome sequencing in Infantile Spasms. In a small study published in Clinical Genetics, Dimassi and collaborators perform family-based exome sequencing in 10 patients with Infantile Spasms that tested negative for array CGH, CDKL5, STXBP1, and ARX duplications. The authors were able to identify a potential cause in 4/10 patients including de novo mutations in SCN2A (p.Leu1342Pro), KCNQ2 (p.Ala306Thr), ALG13, and NR2F1. The authors emphasized that epilepsy in all patients started with Infantile Spasms and that there were not prior seizures.
Comment IH. Albeit very small, the study by Dimassi and collaborators is interesting as it adds confirmatory data to some of the genes that we already know. It’s interesting to see that de novo mutations in KCNQ2 may cause Infantile Spasms in the absence of prior neonatal seizures and it will be interesting to see whether patients with mutations with similar functional effects have similar phenotypes.