Founder variant. Specific language impairment (SLI) is a common neurodevelopmental disorder, presenting as delays in acquiring language skills in children who have no hearing loss or other developmental delays. There is a strong genetic component, but the genetic architecture of SLI is entirely unknown. In a recent publication in PLOS Genetics, exome sequencing is performed in the founder population of the Robinson Crusoe Island where SLI is common. Using a combination of exome sequencing and association study, the autors identify a variant In NFXL1 as a plausible candidate for language delay. 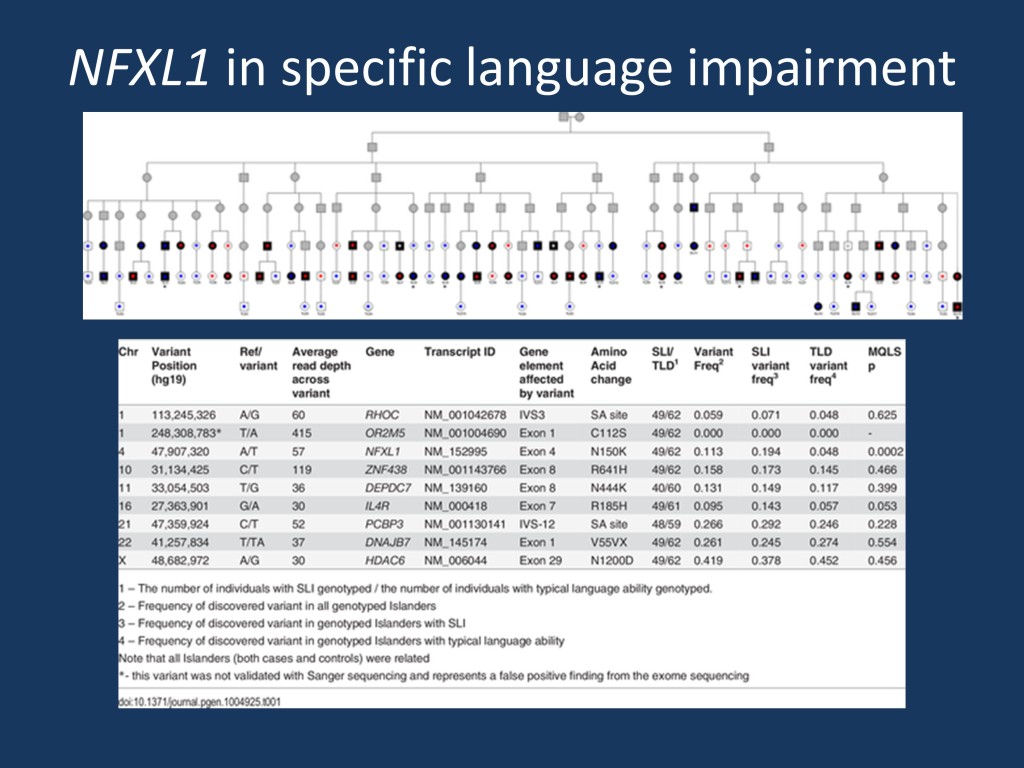 The pedigree of the founder population with individuals with specific language impairment in black and a list of variants identified in 5 individuals with specific language impairment undergoing exome sequencing. Only the variant in NFXL1 is significant when the candidate variants were tested for association with a speech delay phenotype in the Robinson Crusoe population. (modified from http://journals.plos.org/plosgenetics/article?id=10.1371/journal.pgen.1004925 under a Creative Commons License).

Speech and genes. Speech and genetics is an interesting and evolving field. The epilepsy community always has a vested interest in this area given the overlap of speech issues and seizures, particularly in the epilepsies within the Rolandic Spectrum. However despite a strong evidence for genetic factors, the genetics of speech is poorly understood. Other than genes for very rare and specific speech syndromes such as the FOXP2 gene and some of the genes that we had identified in epilepsies involving the speech areas such as GRIN2A, CNKSR2, little is known about the genetic architecture of speech delay in the absence of more complex neurodevelopmental disorders. Some association studies have suggested variants in ATP2C2, CMIP, ABCC13, FLNC, RBFOX2, ROBO2, NDST4, ZNF385D, COL4A2, and NOP9, but few of these variants have been confirmed in larger studies. The Robinson Crusoe Island off the Chilean cost has a very high prevalence speech delay of up to 35%. For genetic studies, this population is interesting as the current 663 inhabitants are the offspring of only 64 initial settlers.

Association, not linkage. Villanueva and collaborators performed exome sequencing on 5 individuals within the founder population and filtered for variants that were shared by all individuals. They then went on to follow up the particular variants in 111 individuals, roughly half of them with specific language impairment using an association approach. This combination is quite interesting as the authors basically treat the entire population as a large family by querying exome for shared variants, but then use and association approach rather than a linkage approach to follow up promising candidates. Linkage analysis in the same cohort/extended family did not suggest evidence for any convincing linkage peak.

Finding NFXL1. Association analysis rather than linkage can be used in cases where the population is large and the variant is presumed to have a low penetrance (caveats see below). From the initial 9 candidate variants that were present in all individuals, only one variant was found to be associated with SLI, present in 20% of children with SLI, but only in 5% of patients with typical language development. This was a variant in NFXL1, a gene coding for Nuclear Transcription Factor, X-Box Binding-Like 1. Using a follow-up cohort in the UK, the authors identified four more nonsense variants and suggest that these variants may also contribute to the SLI phenotype.

Risk factor? The study by Villanueva and collaborators tries to strike a balance between a family study and an association study. The concept of looking for shared variants using exome sequencing is the classical concept of a family study that looks at variants with high penetrance. The subsequent association study within the founder population assumes that the variant has a low penetrance. Accordingly, the authors use two different paradigms rather than adhering to a single, all-encompassing strategy. This leaves us as readers with very little idea whether these findings may have occurred by chance alone. For a family study, there is little evidence that the variant actually segregates with the phenotypes. For an association study, the study is underpowered. The UK follow-up cohort looks at specific rare variants, but it is not immediately clear whether this finding is significant if we compare this frequency to the frequency in large population genetic databases.

What you need to know. Founder populations offer the huge opportunity to decipher genetic risk factors for relatively common neurological disorders given the genetic homogeneity of these populations and a strong founder effect. In the recent study, the authors combine exome sequencing and association studies to provide some evidence for a risk factor for specific language impairment within in the NFXL1 gene. Despite the unique population the cohort is still relatively small and probably underpowered for an association approach. Therefore, it will be interesting to see whether this finding holds up in future confirmatory studies.