Reeler. In 1951, the geneticist D.S. Falconer identified a spontaneous mouse mutant with an abnormal, “reeling” gait. This mouse, aptly called reeler, was later found to have developmental abnormalities of the cerebellum and, most prominently, an inversion of the layers of the cortex. At this point, interest was piqued to identify the underlying gene, which was eventually pinpointed in 1995. Reelin, the culprit gene, was found to be a secreted protein of cortical support cells and was subsequently found to be the cause of human lissencephaly with cerebellar hypoplasia (LCH). In a recent study in the American Journal of Human Genetics, reelin takes on a new role as a novel gene for a familial form of lateral temporal lobe epilepsy. 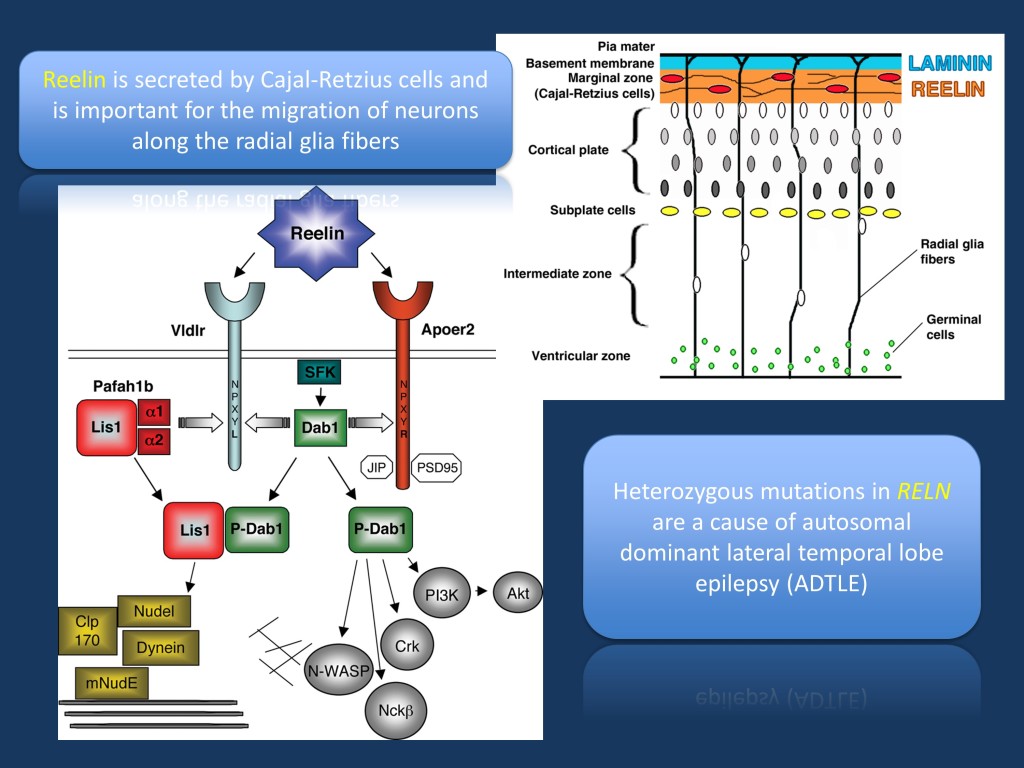 Linkage. Linkage analysis assesses the probability that, in a given pedigree, common genetic markers are cosegregating due to linkage or to chance. If this cosegregation is due to linkage, this may indicate that the causative gene is hidden somewhere in the linkage region. Linkage works beautifully in very large families and pretty much all the epilepsy genes identified at the turn of the millennium stem from large families where linkage analysis was applied to narrow down the genetic interval where a given gene is hidden. Linkage has not that been successful in smaller families or when smaller families are grouped together. In their current study, Dazzo and collaborators combine linkage in small families with exome sequencing and pull out heterozygous RELN mutations. To my knowledge, this is the first time that this combination has worked in epilepsy research.

RELN in ADTLE. Dazzo and collaborators investigate 16 families with ADLTLE, which were negative for LGI1. Through linkage, the authors demonstrated a suggestive linkage to chromosome 7q22.1 and subsequent exome sequencing with prioritization of the variants in this region found heterozygous RELN variants in 7 families including two larger families that contributed significantly to the LOD score. The authors went on to examine Reelin levels in serum in patients carrying the mutations, suggesting that these mutations result in less secreted Reelin protein. This data is particularly relevant since the RELN mutations had reduced penetrance and could therefore not fully be excluded to be found by chance using purely statistical approaches.

Reelin. As mentioned earlier, Reelin’s name comes from the abnormal gait of reeler mice, which were found have homozygous mutations of the RELN gene. During development of the brain development, reelin is secreted in the cortex and hippocampus by the Cajal-Retzius cells. The cells expressing reelin are mainly found in the prenatal brain and located in the marginal zone of the cortex, which is a layer underneath the cortical surface. The current model for reelin function suggests that the protein is secreted from Cajal-Retzius cells and “attracts” neurons to migrate to the cortical surface and detach from the radial glia, the climbing frame of the migrating neurons.

This is what you need to know. RELN is a new gene for lateral temporal lobe epilepsy, adding to a growing number of genes where different phenotypes are seen in heterozygous versus homozygous mutations. The frequency of reported families with RELN mutations is likely to grow within the next few years and it will be interesting to see whether the phenotypic spectrum is limited to lateral temporal lobe epilepsies or whether there is broader phenotypic picture emerging.