25,000 genomes. The epilepsy community is currently preparing for the largest sequencing project in the epilepsies so far, responding to a call by the National Human Genome Research Institute (NHGRI). If funded, the Epi25 project will allow us to begin sequencing 25,000 individuals with epilepsy, helping us to achieve the next, necessary level for gene discovery in human epilepsies. Here are some of the reasons why we need Epi25 and why you should be part of it. 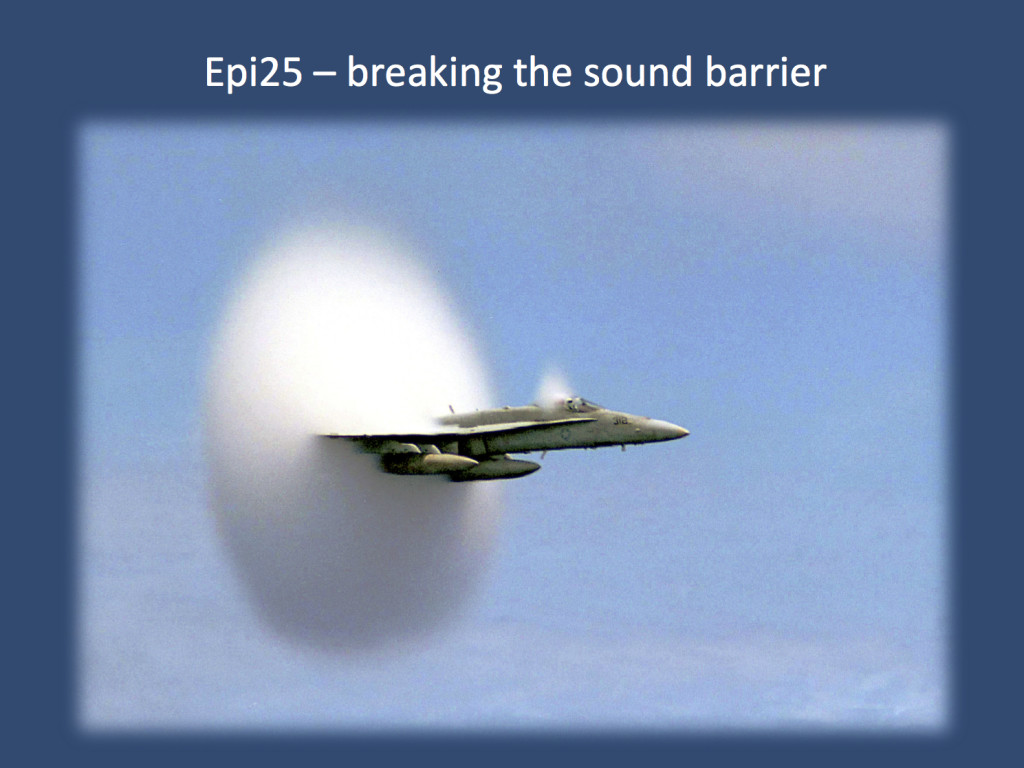 Breaking the sound barrier of epilepsy genetics. The Epi25 will project will allow us to hunt epilepsy genes on an unprecedented scale. We need this project to take our next, necessary step in epilepsy genetics as this is dictated by the complex genetic architecture of many common epilepsy. Epi25 still needs a convincing and strong slogan to drive this point home. While our creative wheels are still spinning to come up with good suggestions, here’s our idea of a sound barrier. Epi25 will accelerate our current efforts to Mach 3 (modified from www.flickr.com/photos/telstar/1203783516 under a Creative Commons Licence).

The Epi25 dream. The idea of Epi25 was born at the Annual Meeting of the American Epilepsy Society 2014 in Seattle. It started out as a rumor, but then became reality quite soon: the NHGRI is calling for projects that will sequence 25,000 individuals with particular diseases, announcing the largest and most comprehensive sequencing efforts worldwide so far. A number of diseases will be funded and the epilepsy community is collaborating with the Broad Institute in Boston where it is hoped that a variety of common neurodevelopmental disorders will be studied. A highly successful planning meeting was held at the Royal Society in London on March 9/10, 2015 – a Charter has been agreed to and committees (Strategy Committee Executive Committee, Phenotyping working group) are being formed. This will be a gigantic project, which will allow us for a completely new insight into the genetics of neurodevelopmental disorders. It is not yet clear, if the grant is successful, what proportion of the 25,000 subjects will be be able to be sequenced with funds allocated – it is likely to be a substantial proportion but more support will be needed. And by the way, we’re talking about whole-genome sequencing. Let’s dream for a second on what we could accomplish with 25,000 genomes and why Epi25 is a project that simply must be funded.

1 – Sound barrier
Without belittling any of the efforts that we have in the field so far: we need to do genetics on a scale that is at least an order of magnitude larger than what we do today. And this conclusion is simply an acknowledgment of the complicated genetic architecture that the epilepsies present with. We have tried to identify common variants and with studies including a few thousand individuals we bare scratch the surface. We have looked for rare, monogenic diseases, but with the exception of the surprising role of de novo mutations in epileptic encephalopathies, we struggle in finding monogenic causes of common epilepsies. The presumed genetic architecture of common epilepsies is as difficult to crack as you could possibly imagine: many rare to very rare variants with a medium to small effect size. Accordingly, with our current approaches, we are pretty much stuck when it comes to the genetic architecture of the majority of the seizure disorders that present in clinical practice. We need support to lift us the next level of studies that would allow us to identify a puzzle of many rare variants, which all contribute a little to disease risk. Epi25 may not be sufficient for this, but it is a great chance to advance understanding of the genetic architecture of the more common epilepsies.

2 – The remaining 70%
The surprising and rapid progress of gene discovery in epileptic encephalopathies may suggest that we have already made the critical leap towards understanding the genetics of seizure disorders. Why ask for more? Let’s put it this way: our discovery of recurrent, statistically reliable genes with de novo mutations is somewhat of a favorable statistical anomaly and merely the tip of the iceberg. Even for de novo mutations in the epileptic encephalopathies, we have more singular gene findings than recurrent mutations and our ability to predict the role of de novo mutations in genes never described before is not very advanced. These single gene findings require functional, but also genetic context that only a large-scale study will generate. To explain this differently: gene discovery in rare epilepsies has always profited from genetic studies in milder, more common epilepsies. Without GEFS+, SCN1A in Dravet Syndrome would probably have been discovered more than a decade later. To understand and interpret the remaining 70% of severe epilepsies, we need a large amount of data to support us. Therefore, Epi25 will be the next necessary and consequent step into this direction.

3 – Focus on phenotypes
Epi25 will utilize very broad phenotypes, and apply brute-force sequencing. And that’s all we really want at the moment to find novel genetic risk factors. However, for the medium term, we will have a large cohort of patients sequenced, which will give us the unique opportunity to re-assess clinical data based on genetic findings, to query response to anti-epileptic medication, and to discover novel entities based on joint genetic features. We may be able to suggestion scores for outcome or side effects. All these future projects would have one thing in common: they do not need to sequence anymore. Epi25 will be a genetic project with the ultimate goal to have a joint dataset that will allow us not worry about genetics anymore. This constellation will allow us to perform clinical studies at a completely new level, generate novel ideas for distinct projects, which will impact on patient care. We can invest our future funds in personnel for phenotypic studies or for studies on precision medicine. We can generate preliminary data for proposals on data available to the community. For patient-based research, the Epi25 dataset will be a unique innovation.

4 – Beyond genes
How much in terms of genetic risk is hidden beyond genes in non-coding territory? We don’t know, but it would be short-sighted to assume that there is nothing out there. With whole genome sequences available for a large patient and control cohorts, we can actually ask this question and identify novel ways that our genome make us susceptible to neurodevelopmental disorders. To give you an example: one of the top hits in the recent GWAS studies on epilepsies falls in the region of the SCN1A gene. However, the highest signal is not in the SCN1A gene directly, but next to it in non-coding DNA that harbors some intriguing non-coding functional elements. We need to have a look beyond genes if we would like to get a more complete picture.

5 – Community
Epi25 will be the Large Hadron Collider (LHC) of Neurogenetics – a project of unprecedented scale that requires the international community to jointly work together. Epi25 is beyond individual investigators, but is a true collaborative effort that will be managed and led jointly. Epi25 already has support from all major groups and consortia around the globe, and joint access to this unique dataset will spur an unprecedented number of discoveries and follow-up studies. Moreover, an international collaborative effort such as Epi25 will require a new definition of leadership and communication. The Epi25 Governance Charter is already one of the most progressive consortium agreements to date – including a clear commitment for fair and transparent leadership, data sharing, a strong statement in support of raising junior scientists as future leaders and a pledge that all data arising from Epi25 will be open-access. Epi25 will generate a new culture of team science of international collaborations in the field. If there really is a Higgs-Bosom of epilepsy genetics, I am convinced that we are going to find it.