GRIN2A. Mutations in several genes coding for NMDA receptor subunits have recently been found in various neurodevelopmental disorders. Amongst the different genes, GRIN2A is one of the most prominent ones and mutations in this gene are found in patients with epilepsy-aphasia syndromes. So far, we have mainly looked at GRIN2A from the epilepsy side. In a recent publication in Neurology, Turner and collaborators now examine the speech phenotype in GRIN2A families. They examine two families where speech issues are a prominent phenotypic feature. It turns out that GRIN2A mutations may predispose to a distinct speech phenotype. 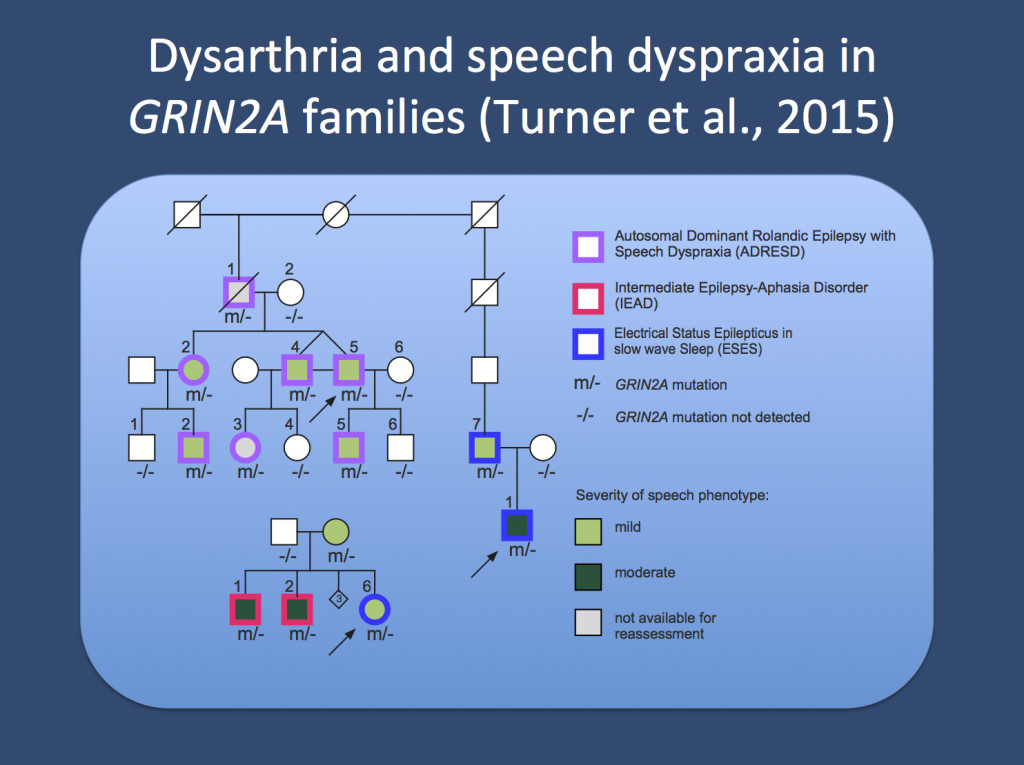 Pedigree with annotated phenotypes of the two families examined by Turner and collaborators.

Neuroanatomy of speech. Even though we don’t realize when talking, speech is a highly complex function of the nervous and motor system. Proper speech requires planning and execution. Problems at various points along the way from the CNS to the muscles of the mouth, throat, and tongue can result in speech disorders. Let’s quickly walk along the human speech production pathway and introduce some of the concepts. Let’s go backwards: say “pataka”. By doing this, you are transforming a burst of air into sound including three different consonants that originate from different parts of the mouth and throat, including the lips (“pa“), your tongue pushing against your upper teeth (“ta“) and the back part of the tongue pushing against the soft palate, the back part of the roof of the mouth (“ka“). You have used a large number of different muscles and the activity of at least three cranial nerves. If the clearness or articulation of “pataka” is reduced, for example due to dysfunction of either the muscles or the cranial nerves, this results in a motor speech disorder referred to as dysarthria. In dysarthria, characterized by difficulties with articulation, “pataka” still comes out – however, it may sound mumbled or slurred. Often, the voice also sounds nasal due to weakness of the velum, the back part of the soft palate. Let’s take one more step back.

Cortical. The neurons of the cranial nerves innervating the lips, tongue, palate and throat are innervated by the corticobulbar tract, which comes from the primary motor cortex. The motor cortex itself gets signals from the Broca’s area, which is usually located in the left frontal cortex. Broca gets it input from the Wernicke area, which is further back in the superior temporal gyrus and combines the auditory input to plan the act of speaking. Damage to either Broca’s area or Wernicke’s area will result in aphasia. During the usual speech process, these areas receive input from multiple other brain regions. Excessive epileptiform activity in the rolandic region, which overlays some of the cortical speech centers, results in epileptic aphasia. This phenomenon is seen in some children with Landau-Kleffner Syndrome (LKS), who suddenly lose their ability to speak. In addition to the aphasia, patients with LKS also have auditory agnosia, the inability to process sounds. For example, patients hear the water running, but they have difficulties understanding that this sound was produced by a faucet. Some patients with LKS have mutations in GRIN2A.

Speech coordination. Let’s come back to “pataka” again. In order to put these three syllables together, extensive motor planning is necessary. When this planning step is affected, this is referred to as speech dyspraxia or apraxia, terms that are used interchangeably. Patients with speech dyspraxia have difficulties repeating “pataka” even though there is no obvious weakness of the speech muscles. In the dimension of the nervous system, this is miles away from the regions that may result in dysarthria when lesioned. Speech dyspraxia, the difficulty in planning speech motor movements, is known to be present in children with epilepsy-aphasia syndromes. Dysarthria has not been described in GRIN2A patients before.

ADRESD. In their current study, Turner and collaborators look at two families with mutations in GRIN2A. The epilepsy in these families was not as severe as in other patients. The speech problems in these two families appeared to be the more prominent feature. One of the two families with autosomal dominant rolandic epilepsy with speech dyspraxia (ADRESD) was previously described. It was not described before that affected patients also had dysarthria. The video presented by Turner and collaborators present a patient from one of the families with prominent dysarthria, giving the proband’s speech a distinct quality (link to video from Neurology website).

This is what you need to know. Speech disorders are difficult in many cases. GRIN2A is one of the few genes that are thought to be involved in human speech disorders. This finding adds another interesting twist in the GRIN2A story and might make us think how common GRIN2A may be in patients with speech disorders.