Issue 4/2015. Trying to keep up with the publications of the week in the field, we have selected three manuscripts this week, which challenge some of our well-established beliefs. It’s about an autism gene losing its statistical support, a familial epilepsy gene rediscovered in focal cortical dysplasia, and the surprises of whole-genome sequencing in familial autism. 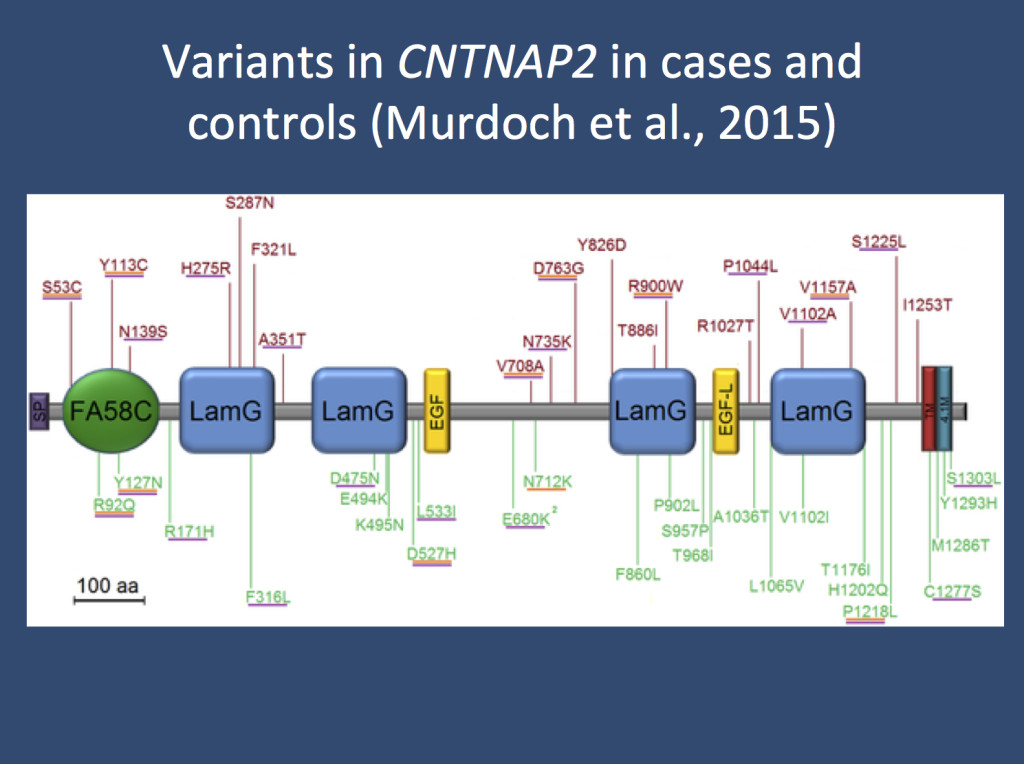 Location of all CNTNAP2 mutations of interest, i.e. rare and exclusive to cases or controls. Mutations were counted if missense, nonsense, splice site, or frameshift in CNTNAP2 (in point of fact, all were missense). Variants in red are exclusive to cases; those in green, controls. Those predicted to be deleterious in SIFT are underlined in orange; in PolyPhen2, purple. (adapted from Murdoch and collaborators under the Creative Common attributions of PLOS Genetics)

CNTNAP2 no more. While TTN is the largest gene in the human genome, CNTNAP2, coding for contactin-associated protein-like 2 is the gene that occupies the largest space on a human chromosome, basically covering much of the chromosomal band 7q35. It is also known as CASPR2 or NRNX4 and codes for a synaptic adhesion protein. Deletions in CNTNAP2 are known to be risk factors for various neurodevelopmental disorders and accordingly, also rare variants in this gene have been suggested to predispose to autism, intellectual disability, or epilepsy. In a recent publication in PLoS Genetics, Murdoch and collaborators demonstrate that this assumption is false – in a large cohort of more than 2000 patients with autism compared to controls, they do not find evidence for an association of this gene with the autism phenotype.
Conclusion: CNTNAP2 was a gene that was thought to be contributory or causal, but some of the evidence implicating this gene in neurological disorders was circumstantial. In fact, some of our most favorite genes might not stand the test of time.

FCD and DEPDC5. Massive parallel sequencing has provided us with solid evidence that mutations in components of the mTOR pathway are implicated in large hemispheric brain malformations such as hemimegalencephaly. These mutations are usually somatic, e.g. they arise de novo in only a fraction of the cells during embryonic development. But what about genes known to cause familial focal epilepsies? In a recent publication in the Annals of Neurology, D’Gama and collaborators identify somatic mutation in DEPDC5 in patients with hemimegalencephaly and focal cortical dysplasia.
Conclusion: The current publication is a missing link between the role of somatic mutations of mTOR components and familial epilepsies due to DEPDC5. There seems to be an entire spectrum unfolding related to germline and somatic mutations in genes of the mTOR pathway.

Autism whole genome. De novo mutations play an important role in neurodevelopmental disorders including autism, intellectual disability, and epilepsy. However, what is the role of de novo mutations in apparently familial forms of autism. In a recent publication in Nature Medicine, Yuen and collaborators sequenced 85 autism quartets, i.e. families with two affected children. They find that in up to 70%, the second sib did not share the other sibling’s de novo mutation, but that the phenotypes of families were more similar if the same mutation was found in siblings.
Conclusion: In the era of massive parallel sequencing, we shouldn’t get fooled by apparent inheritance patterns in small families. In many cases, the prominent contribution of de novo mutations will be more relevant than potentially recessive genes.