Issue 2/2015. For the second issue of our publications of the week in 2015, we have selected recent publications on the genetics of Febrile Seizures, the complexities of interpreting variants in large genes and functional studies on progressive myoclonus epilepsies due to mutations in SCARB2 and CTSF. 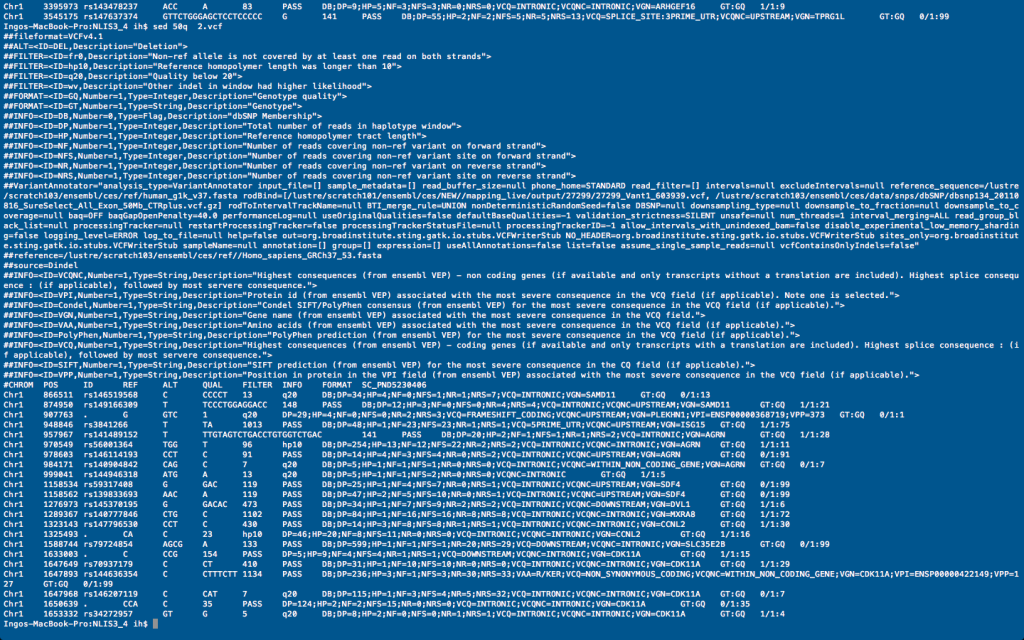 Biopoetry. The publication on NEB and the difficulties of interpreting variants in large genes reminding me of a screenshot that I took from my laptop a few years ago. These are the first lines of an unfiltered exome, the first 50 rows of a VCF4 file are printed in the command line. Unix afficiandos may realize that I have used the “sed” command for this, which hopefully will gain me some points for style. Nevertheless, it may give you an idea of the complexity of genomic data and why you may sometimes get confused with large genes.

SRP9 and Febrile Seizures. A recent publication by Hessel and collaborators examined the role of the signal recognition particle 9 (Srp9) gene and Febrile Seizure based on mapping traits in mouse strains and gene expression in human hippocampal tissue. An association study in ~300 patients with TLE and ~200 controls found a modest association with a promotor variant in this gene, which was not significant after multiple testing.
Conclusion: Small association studies on top of functional studies are difficult to interpret, especially since we need to rely on a very high level of confidence for association findings. One possibility to overcome these issues is to access already genotyped datasets. For example, in the recent genome-wide association study (GWAS) on Febrile Seizures, there was no association to this region.

NEB variants in epilepsy and muscle weakness. There is an interesting back-and-forth in the Journal of Human Genetics on a gene finding in a Korean family with intellectual disability, epilepsy, and muscle weakness. Jin and collaborators initially published a report on compound heterozygous mutations in the Nebulin gene in a family with two affected sibling through whole-family exome sequencing. Nebulin is a large cytoskeletal protein, and mutations in NEB are known to cause recessive nemaline myopathy. Now, a response to their study challenges the initial findings – in addition to being a disease gene, the NEB gene is also extremely large, comprising a total of 183 exons. Furthermore, variants in this gene are frequently seen. Therefore, Pelin and collaborators argue that the initial findings simply arose by chance.
Conclusion: Nebulin (NEB) and Titin (TTN) are very large proteins, and mutations in the corresponding genes can frequently be found in patients and controls. In fact, de novo mutations in TTN are one of the most common recurrent mutations found in patients with epilepsy, except that we ignore them given the size and variability of the gene. Implicating large genes in disease requires additional evidence.

SCARB2 and Cathepsin F. Recessive mutations in CTSF coding for cathepsin F are known to cause adult-onset neuronal ceroid lipofuscinosis (NCL), a neurodegenative disease, which is also referred to as Kuf’s disease. A recent publication by Peters and collaborators now examines the role of altered CTSF on the cleavage of SCARB2, a lysomal protein involved in lysosomal trafficking. Mutations in SCARB2 are also a known cause of progressive myoclonus epilepsies. The authors show that SCARB2 is no longer cleaved when disease-causing mutations are introduced into CTSF.
Conclusion: The authors demonstrate an interesting connection between two disease-related lysosomal proteins involved in progressive myoclonus epilepsies. Another pathway emerging…