Seattle 2014. This year, the 68th Annual Meeting of the American Epilepsy Society was held in Seattle. While much of the scientific content of AES is still under publication embargo and will be the topic of our next post, here are five unexpected things I learned at AES this year. 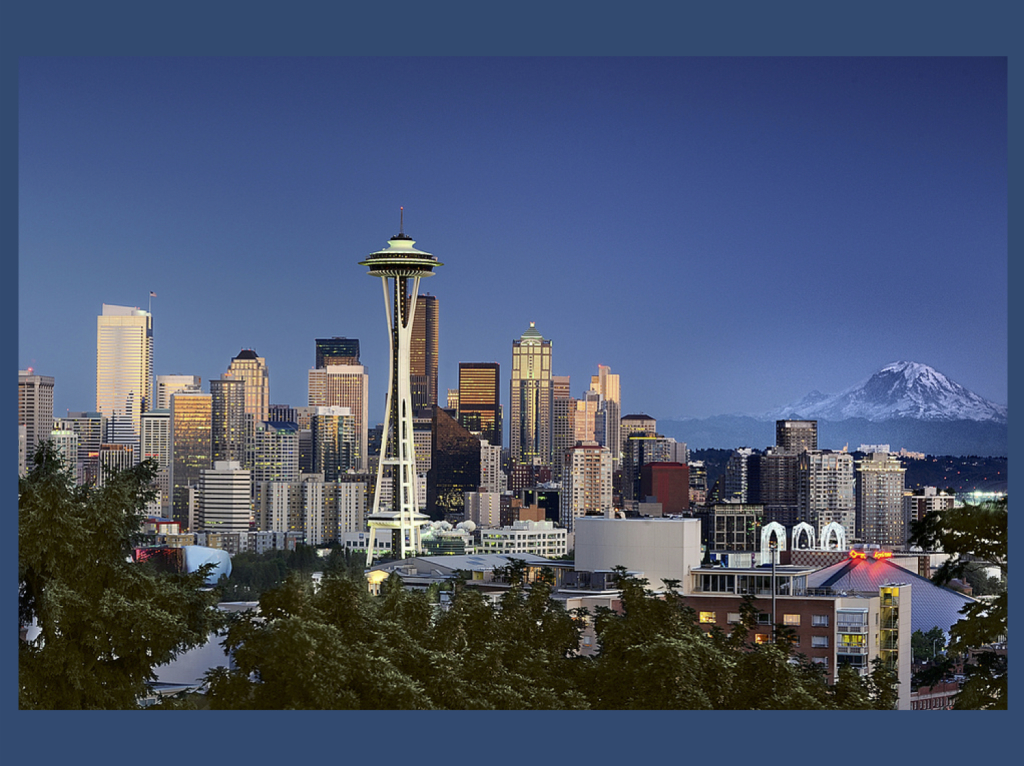 The mountain is out. Only the view of Mount Rainier helps you gain a certain shift of scenery. Meetings like the Annual Meeting of the American Epilepsy Society are a good opportunity to connect with people in the field and take a bit of time to look at issues from a different perspective (adapted from Flickr under a Creative Commons license).

1 – Finding a Starbucks in Seattle. Shouldn’t be that big of a deal, right? However, Roland, Slave, and I were wandering through Seattle for almost 45 min before finding a good place to sit down and talk. Take home message: we all have things with different levels of priority on our mind – allowing yourself a shift of scenery will help spur discussions that don’t just revolve around the hyperacute issues that need to be taken care of immediately. I ended up learning about the difference between collapsing and burden analysis, a topic of a future post.

2 – Wall crawler. My highlight of AES was to take the CURE EGI splatter brain wall crawler, splash it against the wall so hard that it actually left a residue and then watch it slowly crawl down the wall. And no, I did not hit any of the gingerbread houses in the Sheraton lobby, even though part of me is wondering about the Google search terms that I would have produced (“German – arrested – epilepsy congress – gingerbread house – splatter brain”). I like the various radical ideas that I saw at AES to raise awareness for genetic epilepsies and I would like to encourage everybody to think about new ways to make yourself heard.

3 – Family organizations. We met the KCNQ2 family organization this year (The Jack Pribaz Foundation), which was founded in 2011 in support of Jack, a little boy with epileptic encephalopathy caused by an alteration in KCNQ2. Every year, there is a least one new family organization represented at AES, which reflects the fact that genetic epilepsies are becoming more visible and better recognized as entities. It also gives the entire field a new dynamic as it reinforces the idea that gene discovery is only the first step. Also, for many researchers, family organizations are a good way to realize that their work matters beyond the purely academic part. All genetic epilepsies are individually rare and most researchers and clinicians working in the field may have never seen a patient with a mutation in the gene that they are working on. In fact, family organizations for SCN2A and CHD2 are already forming and we’re looking forward to having an even larger number of organizations represented at AES in Philadelphia next year. AES needs to seriously consider increasing the size of the congress bags to fit all the logos.

4 – A temporary plateau in gene discovery. I was waiting for at least two or three novel genes to be presented at AES, but many of the genetics poster and presentations focused more on the description of existing gene findings than on the discovery of new genes. Have our large-scale studies picked out the most relevant genes and is there a temporary plateauing of gene discoveries in epilepsy? Let’s see how the field develops in the next few months – we’re almost prepared for surprise findings such as KCNC1 in progressive myoclonus epilepsies or KCNT1 in Malignant Migrating Partial Seizures of Infancy (MMPSI).

5 – Writer’s block is a lame excuse. I know that I owe you 2-3 blog posts per week and I’m simply sorry that I didn’t manage myself better to make this happen in the last few weeks. In fact, I felt that I started to develop a dangerous habit – making excuses for not writing. Sometimes, I was too tired, I had manuscripts to work on, or I felt that I would do a much better job starting tomorrow. I used AES this year as a self-imposed wake-up call to break this habit. With this post, I would like to start a series of end-of-the-year blog posts not only about the science behind epilepsy genetics, but also about us as a community of clinicians, researcher and families.