Febrile seizures, FS+, Dravet. Seizures in association with fever can occur in various scenarios. The most concerning clinical events are prolonged seizures in the setting of fever referred to as febrile status epilepticus. These events in infants may be the first manifestation of a genetic epilepsy syndrome such as Dravet Syndrome. Seizures in the setting of fever without a quick return to baseline might be due to an underlying infectious cause such as Herpes Simplex Virus Encephalitis. In most cases, however, febrile seizures are terrifying but self-limiting events that occur once or twice without neurological sequelae. These seizures occur in up to 5% of all children between the age of 6 months to 6 years. In rare instances, children have additional afebrile seizures or febrile seizures after the age of 6 years. This is referred to as Febrile Seizures Plus (FS+).

Genes for Febrile Seizures. Genetic studies were mainly successful in severe epilepsies with fever-associated seizures including Dravet Syndrome and Febrile Seizures Plus (FS+) syndromes. These studies led to the identification of SCN1A, SCN1B, and GABRG2 as candidate genes for FS+ and a growing number of genes for Dravet Syndrome and related syndromes including SCN1A, PCDH19, CHD2, HCN1, GABRA1, and STXBP1. In contrast to this, the genetics of simple Febrile Seizures are not well understood. Large family studies have suggested various candidate regions, but causative genetic variants have never been identified. Twin studies suggest a strong genetic burden to Febrile Seizures and further suggest that simple Febrile Seizures might be genetically distinct from FS+ syndromes, lowering our hopes that both conditions might be part of the same genetic spectrum. To sum things up, we have no idea about the genes that predispose children to febrile seizures. 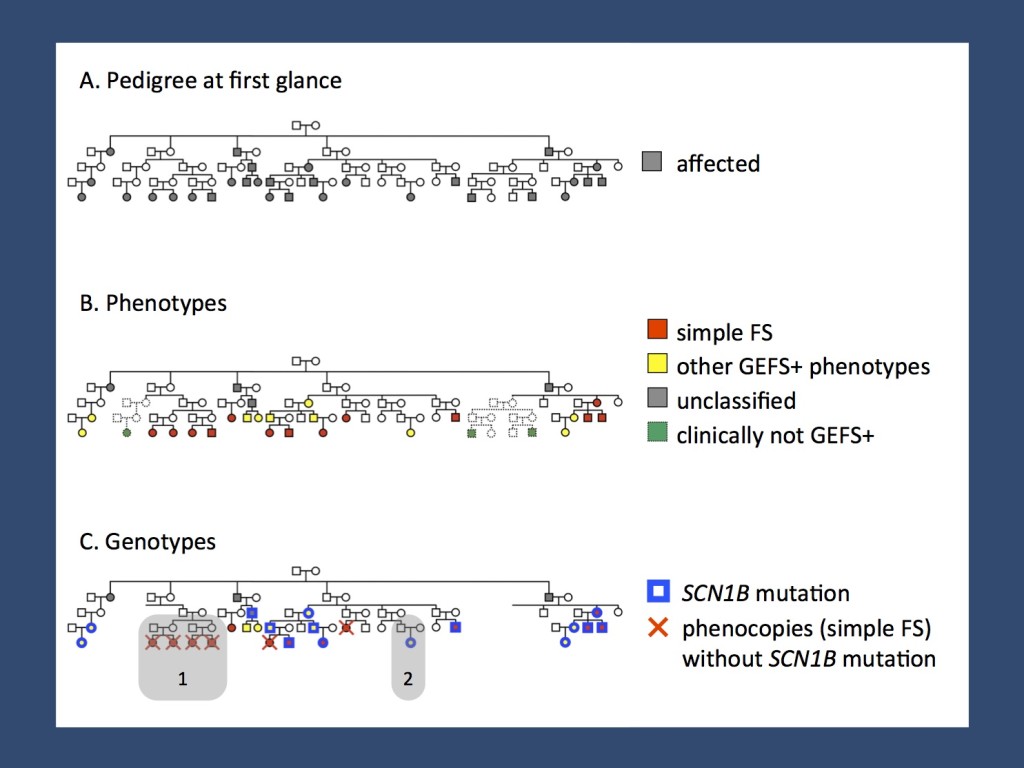 How to approach FS. Febrile Seizures are relatively common events and any genetic study of common disorders is bound to be plagued by phenocopies. Phenocopies (i.e. similar clinical presentations due to different genetic risk factors) are known to occur in large families with FS+ syndromes (figure 1) and are a common confounder in the genetics of common neurological and neurodevelopmental diseases. Be it migraine, ADHD or tic disorders, family studies have never really been successful in identifying candidate genes that withstand the test of time and replication. Accordingly, I am hesitant to predict that any further progress will be made in the genetics of febrile seizures through family studies. We might need to look for other ways to approach the genetics of the most common epilepsy syndrome in children.

What about a GWAS? Looking from the population genetics perspective, a genome-wide association study might be one of the most straightforward ways to get some insight into the genetics of Febrile Seizures. Forget about family studies and exome sequencing for a moment – Febrile Seizures, a as relatively common condition, might be best addressed using an association study, which addresses the issues of phenocopies and genetic heterogeneity by sheer statistical power and sample size. I would not be surprised if SCN1A lights up as a major finding, but let’s not jump to conclusions, as there are possibly other, as yet unknown mechanisms that might be worthwhile exploring.

Why bother? There is a big part about epilepsy genetics that we don’t understand. There are various theories regarding the biology of Febrile Seizures including imbalances of interleukins, minor electrolyte disturbances, etc. None of these theories has any solid genetic evidence behind it. Finding genetic risk factors for Febrile Seizures would help get some understanding of the underlying pathophysiology and might give us a new perspective on how to approach other epilepsies that also have an inflammatory component.

This blog post has been approved by the ILAE Genetics Commission.