The week in review. It’s currently a bit quiet in the literature with respect to novel gene findings. However, there is plenty to explore about genes and variants we already know and their role in human epilepsy. This week’s selection of publications is about functional studies in a gene for progressive myoclonus epilepsy, the EEG signature in a microdeletion syndrome, and contribution of mitochondrial genetics in intractable epilepsy. 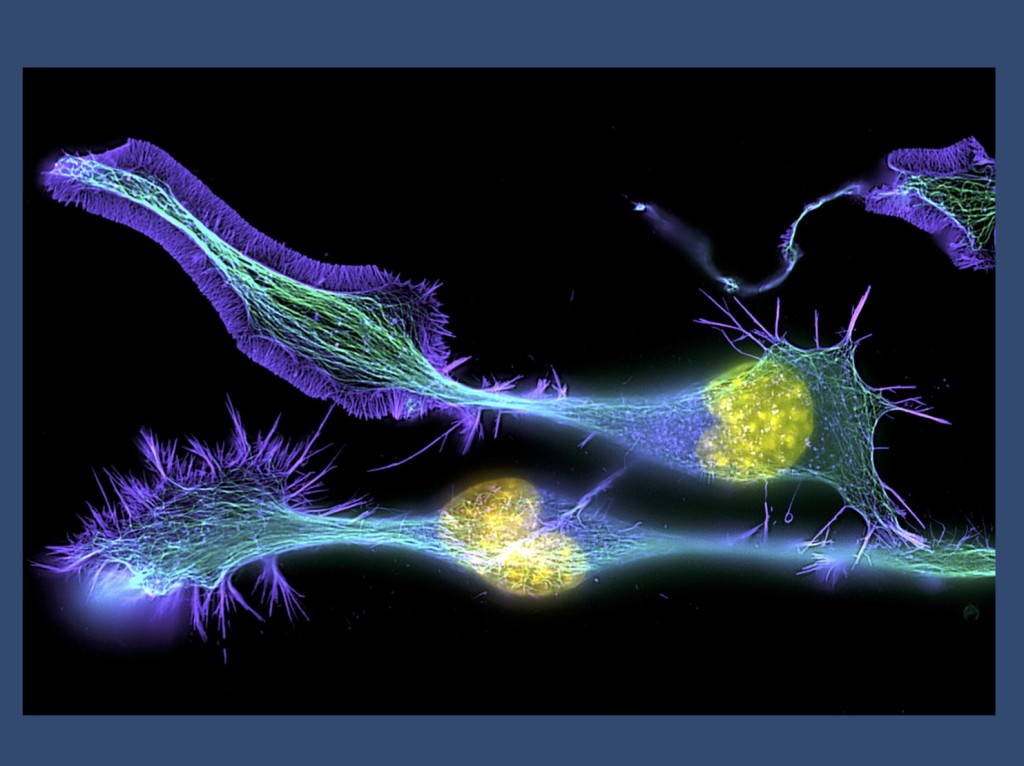 Developing neurons (from https://www.flickr.com/photos/zeissmicro/14256058429 under a Creative Commons License)

Prickle. PRICKLE1 is the causative gene in a progressive myoclonus epilepsy that resembles Unverricht-Lundborg disease. However, the precise function of the PRICKLE1 protein remains unknown. In a recent publication in the Proceedings of the National Academy of Sciences (PNAS), Ehaideb and collaborators investigate the role of prickle orthologs in flies. They find that prickle proteins are important for the polarity of microtubules and axonal growth. Epilepsy-associated mutations lead to a faster anterograde transport of vesicles, which might be the causative mechanism linking mutations in PRICKLE1 to epilepsy.
Conclusion: Disturbance of axonal transport during neuronal development seems to be an interesting albeit not very intuitive mechanism for the pathophysiology of epilepsy. I am very curious to see whether similar phenomena can also be observed in other genetic epilepsies.

Phelan-McDermid Syndrome. Microdeletions at 22q13.3 usually result in the phenotype of Phelan-McDermid Syndrome (PMS), a complex neurodevelopmental disorder, which can be characterized by intellectual disability, autism, and dysmorphic features. Haploinsufficiency of the SHANK3 gene is considered to be the main contributor the neurodevelopmental features in PMS. Some children with PMS also develop epilepsy. In a recent publication in Seizure, Figura and collaborators try to describe the electroclinical features of PMS. They find that a subgroup of their patients had a recognizable EEG signature of multifocal paroxysmal abnormalities over the frontal-temporal regions.
Conclusion: Exploring phenotypic features of genetic epilepsy syndromes and defining new entities based on these findings will help us better understand the natural course of these disorders. Particularly microdeletion syndromes may show particular EEG findings that might be worthwhile exploring.

Mitochondria. In a recent publication in the Journal of Molecular Neurosciences, Luna and collaborators investigated mitochondrial copy number, oxidative damage by quantitative polymerase chain reaction (PCR) and mtDNA variations in 21 patients with epilepsy and 11 controls. They find that the combined effects of oxidative mtDNA damages and mtDNA copy number resulted in a significant correlation with epilepsy. The authors claim that mitochondrial genetics play a significant role in the pathogenesis of epilepsy in children.
Conclusion: There is little in terms of significant genetic association or correlation that can be derived from 21 patients and 11 controls. I would be curious to see a replication of their finding in an independent cohort of epilepsy patients.