This week. This week’s publications in epilepsy genetics might be interesting for you, as they describe the first genetic risk factor for typical rolandic epilepsies, novel CNV studies in autism, and an unexpected de novo mutation in schizophrenia. 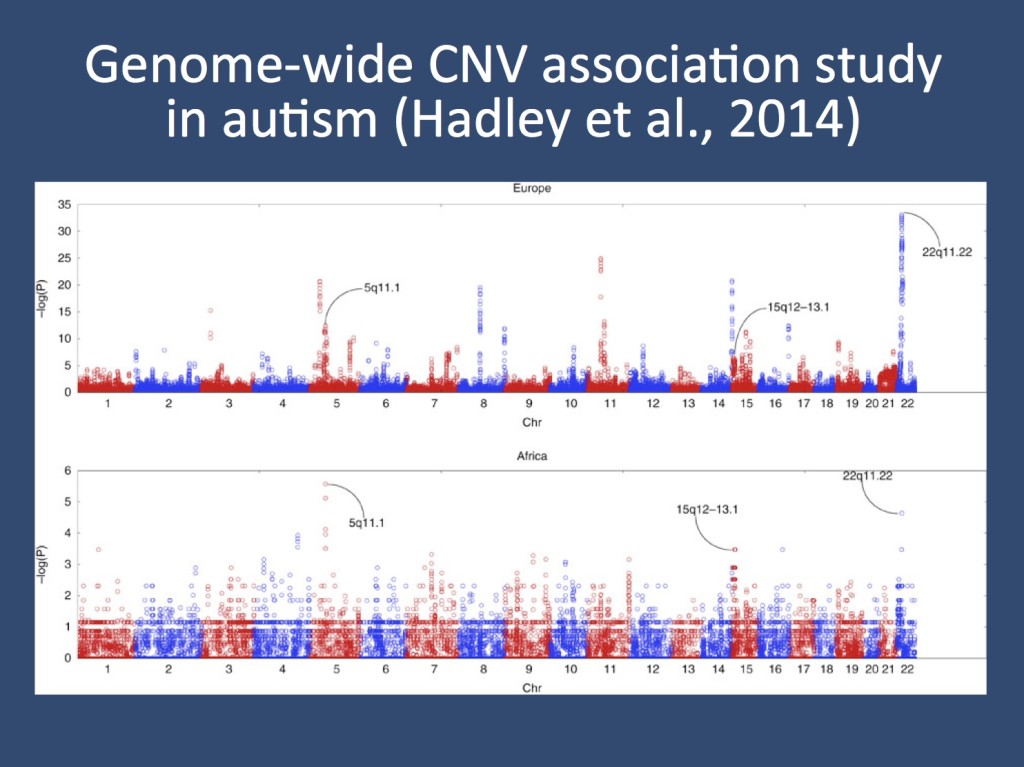 The study by Hadley and collaborators also included a genome-wide CNV association study in of 4,634 cases versus 4,726 controls in Europeans and of 312 cases versus 4,173 controls in Africans. They identify three already known chromosomal regions including copy number variants at 22q11.22, 15q12-13.1, and 5q11.1. They go on to use the CNV data for a gene family interaction network (GFIN) analysis. (reproduced under a Creative Commons License from http://www.nature.com/ncomms/2014/140606/ncomms5074/full/ncomms5074.html)

Autism CNVs. In a recent publication in Nature Communications, Hadley and collaborators apply the analysis of gene family interactions network (GFIN) to copy number variation data from patients with autism – the novelty of this network analysis is the analysis of protein-protein interactions including all members of a given gene family. They identify metabotropic glutamate receptors as genes with significantly disrupted gene family interaction networks, suggesting that these genes might be potentially drug targets.
Conclusion: The genetic heterogeneity of neurodevelopmental disorders makes the analysis of single genes complicated – using network studies may provide important results, but requires a stringent analysis and a large sample size. Therefore, CNV studies are good candidates for such analyses.

SETD1A in schizophrenia. In a publication in Neuron that appeared in May (and that we missed somehow), Takata and collaborators identify loss-of-function de novo mutations in SET1DA in patients with schizophrenia. This gene encodes a subunit of the histone methyltransferase and suggests defects in chromatine regulation in schizophrenia.
Conclusion: While an earlier study has basically concluded that meaningful de novo mutations in schizophrenia are too heterogeneous to allow for any interpretation with regard to pathogenicity, the recurrence of loss-of-function mutations is intriguing. It will be interesting to see whether additional evidence for SETD1A will materialize.